There was once a king whose name was Dionysius. He was so unjust and cruel that he won for himself the name of tyrant. He knew that almost everybody hated him, and so he was always in dread lest some one should take his life.

But he was very rich, and he lived in a fine palace where there were many beautiful and costly things, and he was waited upon by a host of servants who were always ready to do his bidding. One day a friend of his, whose name was Damocles, said to him,

"How happy you must be! You have here everything that any man could wish."

"Perhaps you would like to change places with me," said the tyrant.

"No, not that, O king!" said Damocles; "but I think, that, if I could only have your riches and your pleasures for one day, I should not want any greater happiness."

"Very well," said the tyrant. "You shall have them."

And so, the next day, Damocles was led into the palace, and all the servants were bidden to treat him as their master. He sat down at a table in the banquet hall, and rich foods were placed before him. Nothing was wanting that could give him pleasure. There were costly wines, and beautiful flowers, and rare perfumes, and delightful music. He rested himself among soft cushions, and felt that he was the happiest man in all the world. 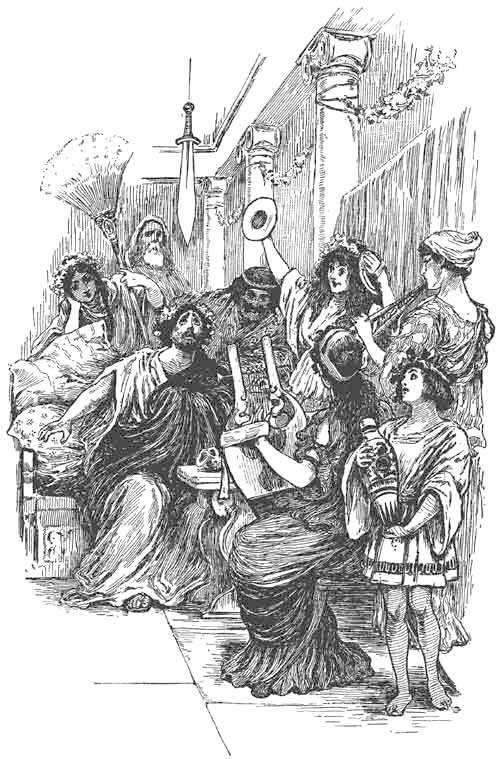 Then he chanced to raise his eyes toward the ceiling. What was it that was dangling above him, with its point almost touching his head? It was a sharp sword, and it was hung by only a single horsehair. What if the hair should break? There was danger every moment that it would do so.

The smile faded from the lips of Damocles. His face became ashy pale. His hands trembled. He wanted no more food; he could drink no more wine; he took no more delight in the music. He longed to be out of the palace, and away, he cared not where.

"What is the matter?" said the tyrant.

"That sword! that sword!" cried Damocles. He was so badly frightened that he dared not move.

"Yes," said Dionysius, "I know there is a sword above your head, and that it may fall at any moment. But why should that trouble you? I have a sword over my head all the time. I am every moment in dread lest something may cause me to lose my life."

"Let me go," said Damocles. "I now see that I was mistaken, and that the rich and powerful are not so happy as they seem. Let me go back to my old home in the poor little cottage among the mountains."

And so long as he lived, he never again wanted to be rich, or to change places, even for a moment, with the king.

If you use Facebook or Google+ & enjoyed The Sword Of Damocles, please tell your friends and let us know to find more like it for you!