There was a man named Cincinnatus who lived on a little farm not far from the city of Rome. He had once been rich, and had held the highest office in the land; but in one way or another he had lost all his wealth. He was now so poor that he had to do all the work on his farm with his own hands. But in those days it was thought to be a noble thing to till the soil.

Cincinnatus was so wise and just that everybody trusted him, and asked his advice; and when any one was in trouble, and did not know what to do, his neighbors would say,

"Go and tell Cincinnatus. He will help you."

Now there lived among the mountains, not far away, a tribe of fierce, halfwild men, who were at war with the Roman people. They persuaded another tribe of bold warriors to help them, and then marched toward the city, plundering and robbing as they came. They boasted that they would tear down the walls of Rome, and burn the houses, and kill all the men, and make slaves of the women and children.

At first the Romans, who were very proud and brave, did not think there was much danger. Every man in Rome was a soldier, and the army which went out to fight the robbers was the finest in the world. No one staid at home with the women and children and boys but the white-haired "Fathers," as they were called, who made the laws for the city, and a small company of men who guarded the walls. Everybody thought that it would be an easy thing to drive the men of the mountains back to the place where they belonged.

But one morning five horsemen came riding down the road from the mountains. They rode with great speed; and both men and horses were covered with dust and blood. The watchman at the gate knew them, and shouted to them as they galloped in. Why did they ride thus? and what had happened to the Roman army?

They did not answer him, but rode into the city and along the quiet streets; and everybody ran after them, eager to find out what was the matter. Rome was not a large city at that time; and soon they reached the market place where the white-haired Fathers were sitting. Then they leaped from their horses, and told their story.

"Only yesterday," they said, "our army was marching through a narrow valley between two steep mountains. All at once a thousand savage men sprang out from among the rocks before us and above us. They had blocked up the way; and the pass was so narrow that we could not fight. We tried to come back; but they had blocked up the way on this side of us too. The fierce men of the mountains were before us and behind us, and they were throwing rocks down upon us from above. We had been caught in a trap. Then ten of us set spurs to our horses; and five of us forced our way through, but the other five fell before the spears of the mountain men. And now, O Roman Fathers! send help to our army at once, or every man will be slain, and our city will be taken."

"What shall we do?" said the white-haired Fathers. "Whom can we send but the guards and the boys? and who is wise enough to lead them, and thus save Rome?"

All shook their heads and were very grave; for it seemed as if there was no hope. Then one said, "Send for Cincinnatus. He will help us."

Cincinnatus was in the field plowing when the men who had been sent to him came in great haste. He stopped and greeted them kindly, and waited for them to speak.

"Put on your cloak, Cincinnatus," they said, "and hear the words of the Roman people."

Then Cincinnatus wondered what they could mean. "Is all well with Rome?" he asked; and he called to his wife to bring him his cloak.

She brought the cloak; and Cincinnatus wiped the dust from his hands and arms, and threw it over his shoulders. Then the men told their errand.

They told him how the army with all the noblest men of Rome had been entrapped in the mountain pass. They told him about the great danger the city was in. Then they said, "The people of Rome make you their ruler and the ruler of their city, to do with everything as you choose; and the Fathers bid you come at once and go out against our enemies, the fierce men of the mountains." 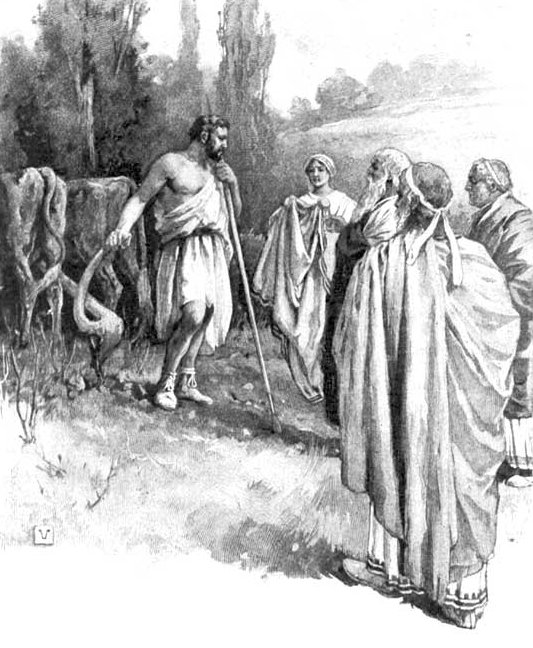 So Cincinnatus left his plow standing where it was, and hurried to the city. When he passed through the streets, and gave orders as to what should be done, some of the people were afraid, for they knew that he had all power in Rome to do what he pleased. But he armed the guards and the boys, and went out at their head to fight the fierce mountain men, and free the Roman army from the trap into which it had fallen.

A few days afterward there was great joy in Rome. There was good news from Cincinnatus. The men of the mountains had been beaten with great loss. They had been driven back into their own place.

And now the Roman army, with the boys and the guards, was coming home with banners flying, and shouts of victory; and at their head rode Cincinnatus. He had saved Rome.

Cincinnatus might then have made himself king; for his word was law, and no man dared lift a finger against him. But, before the people could thank him enough for what he had done, he gave back the power to the whitehaired Roman Fathers, and went again to his little farm and his plow.

He had been the ruler of Rome for sixteen days.

If you use Facebook or Google+ & enjoyed The Story Of Cincinnatus, please tell your friends and let us know to find more like it for you!