Just see the basketful of anemones we got down in the glen! They were as thick there as they could be. We picked and picked and it didn't seem to make a bit of difference, there were so many left. Aren't they lovely?"

"They are dainty little flowers, boys. Where did you say you found them?"

"On the low land in the glen by the brook. There were great trees on both sides of the glen, and it was so still the little brook and the waterfall sounded as loud as a big river. How we wished you were there!"

"What else did you find besides the windflowers, or anemones, boys?"

"Here's a little moss and a few blood-root flowers, and Will Johnson carried home a big bouquet of wild bleeding-hearts."

"That makes me think, Charlie, of a myth there is about the first anemones."

"A myth? What is that, mother? Oh, I know, John," said Charlie; "it is one of those stories that people used to believe just as we used to believe in Santa Claus. He's a myth, you know, and now you please keep still and maybe mother has time to tell us about the first anemones. I like myths."

"This is a hunting story, so I know you will like it, boys.

"But just think of hunting with bow and arrows and spears! Would you like that?"

"Yes, yes!" shouted both the boys.

"Well, years ago in the Golden Age when the world was young there lived a Greek hunter whose name was Adonis. He was tall and straight and handsome. His friends thought it a great pity that he should spend his time in the woods, with only his dogs for company. Away he would go day after day with his arrows at his back and his spear at his side. His dogs were fierce and would attack any creature. His horse was as brave as he. His friends begged him to wait till he was older and stronger before he went into the deep forests, but he never waited. He had killed bears, wolves, and lions. Why should he wait? 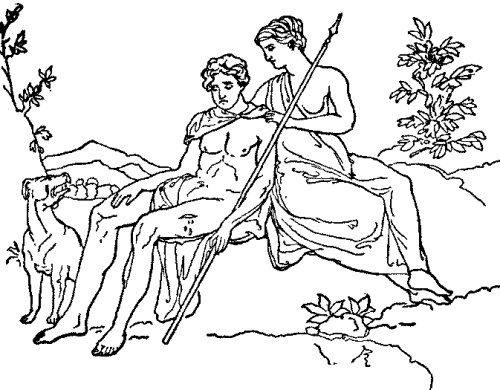 "But the wild hog is fiercer than the tiger. One spring morning while hunting in the forest, Adonis wounded two. Leaving his dogs to worry one while he killed the other, he got off his horse, and, running, threw his spear at the hog. Its thick hide was tough and the spear fell to the ground. He drew out an arrow, but before he could place it in the bow, the ugly beast had caught him with its horrid tusks.

"He tore away and, bleeding at every step, bounded down a hillside toward a brook to bathe his wounds. But the savage beast reached it as soon as he. A flock of white swans that had been drinking from the brook, rose on their strong wings and, flying straight to their mistress, Venus, told the story.

"Back they brought her in her silver chariot, sailing so steadily that, from the silver cup of nectar she brought with her, not a drop was spilled.

"There was nothing but drops of blood on the grass to tell her where he had been. It was all that was left of the handsome hunter.

"Venus sprinkled some of the nectar on these drops and, in an hour, tiny flower buds showed their heads. Then she drove sadly home. Soft winds blew the tiny buds open, and at night blew them away. So people called them wind-flowers, or anemones. And they believe that the pink and purple which colored them came from the heart of Adonis."

"But why didn't tiger-lilies or some other big and showy flowers come, not these pretty little things?"

If you use Facebook or Google+ & enjoyed The Legend Of The Anemone, please tell your friends and let us know to find more like it for you!