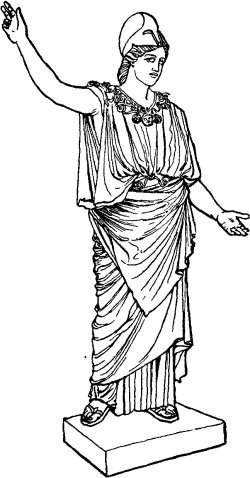 "Has everything a name, father?" asked a wide-awake boy one day.

"Everything I know of has a name," answered the father.

"What is the name of this stone, then?"

"The name of the stone you have just picked up happens to be granite."

"I believe you made that up, father, just because I asked you so quickly. Really is it granite? Has a rock a name?"

"Why, certainly, my boy. It seems strange that a boy of ten does not know granite when he sees it."

"But you lived in the country, father, when you were a boy, and I have been here hardly a month. Oh, here is another kind of stone; what is this?"

The father cracked the bit of rock so as to get a fresh surface and then answered:

"Common white quartz, Harold. You are giving me easy specimens, which is lucky for both of us."

"Why, father, where did you learn all their names?"

"I don't know all their names. I know only the most common ones. To find the names of some kinds of rock or stone I should need quite an outfit, such as you may have seen in the high-school laboratory."

"Do all the flowers have names, too, father?"

"Harold, if you could find a flower that has not been named you would become quite famous. The flower probably would be named after you. Think of that! There is something to work for; and you were wishing only last night that you could be a famous man."

"Where did all the flowers get their names? Did the teachers name them?"

"Oh, I suspect the teachers named some, and many people helped them. I don't believe I ever stopped to think that it is curious that everything on the earth and in the sea and in the sky is named. You are a very thoughtful boy, Harold. Ask all the questions you please."

This praise from his quiet father made Harold happier than anything in the world. He was silent a moment, but then asked:

"Have the stars names, too, father? I mean all of them. I know those large ones have, for you told me."

"Yes, Harold, every star has a name of some kind. Some of them have only a letter or a number. But that answers for a name, you know."

And then Mr. Hadley laughed aloud.

"To-day, father, in the geography class, I learned about many cities, and there are more in the large geography. Do you know how any of the cities got their names?"

"What country were you studying about to-day, Harold?"

"It was about Greece, and some of the cities had such long hard names that I can't remember them. Oh, yes, now I remember Athens. Why, father, you were there once, for I have heard you tell about Greece; and one of the pictures in the parlor is named 'In Athens.' Do tell me something about the place, for I can't make it seem like a real city like New York or Chicago."

"Yes, indeed, I do, and you like olive oil. Oh, of course, olives grow in Greece. I couldn't think what made you ask such a queer question. Now tell me about Greece, won't you, please? Is it a beautiful country?"

"Yes, and I'll tell you a tale of the sea, of olives, and of Athens, all in one. You remember that beautiful head of Minerva, which is near my book-shelf, do you not? Minerva has another name. She is often called Athena. She was known to the ancient people of Greece as the goddess of wisdom and learning. Can you remember the name of the king of the sea?"

"Neptune, father. You have his picture, too, haven't you?"

"Yes, Harold, but now you must learn the name by which the Greeks called him. It was Poseidon. The story goes that Athena and Poseidon were each very anxious to name a certain city in Greece.

"Jupiter said that he would let the one who brought the greatest gift to the people have the honor of naming the place. And then such strife began as you can hardly imagine. Poseidon put his wits at work and called together all his friends for counsel. At last his gift was ready for the day on which they were to appear before Jupiter.

"Minerva, as she was the goddess of wisdom, needed no such help as Poseidon had asked and received. Her plans were ready in a moment and she was waiting for the great day.

"When that day came all the people of the nameless city gathered together to see what was to be brought them. As they were seated on the side of mountain, on the top of which stood Jupiter, King Poseidon appeared on the plain before them, leading a wonderful black horse. It was covered with gold armor. It pawed the ground and stamped with its hoofs, and looked like the leader of a grand army. The people shouted and would have declared for Poseidon without waiting for his rival, but Jupiter quieted them.

"Then the goddess came forward on the plain. She was beautiful, tall, stately. She seemed to be holding something very small in her hand. She opened her hand before the people and commanded a gardener to dig a hole in the earth at her feet. Into this hole she dropped the small something which was in her hand. As soon as the earth was over it, tiny leaves came out. Then it grew instantly into a tree covered with silver-gray leaves. Its trunk grew larger and larger. It seemed to touch the skies It was filled with fruit. She showed them how to extract the oil. She showed them how to use the fruit.

"The horse neighed and pawed, and Poseidon laughed at the woman's gift. 'Here is war, glory, and power!' he cried.

"'Here is life, peace, and plenty!' said the goddess.

"'The city shall be named Athena' came from Jupiter on the mountain top.

"And so the city of Athens was named and the people loved Athena for her gift of the olive tree."

If you use Facebook or Google+ & enjoyed The Gift Of The Olive Tree, please tell your friends and let us know to find more like it for you!