There is an old myth of a winged horse. Would you like to hear it? Listen.

This wonderful horse was under the care of the nine Muses. These nine fair daughters of Jupiter taught men all that is known of music, poetry, history, and the stars. It was said and believed that they helped people to remember what they taught.

And now even their names are forgotten except by the few who love to remember the things others forget.

One beautiful summer morning this winged horse appeared at the fountain of the Muses on Mount Helicon. The laughing Thalia, the Muse of Comedy, saw him as she dropped from the sky. Dancing Terpsichore tried to take him by the mane, but the white wings flashed in her face and the wonderful steed was gone before she had touched him.

Urania, the Muse who loved the heavens, believed that he was from some star world.

Clio, the Muse of History, knew that no such creature had ever lived on earth before.

They all watched for his return. The next morning he was seen again at the fountain; after that he came every day. The Muses named him Pegasus.

"We know that there is a work for all created things. What can his be?" the sisters asked one another.

Sure enough his work came at last.

In a distant land was a brave young soldier named Bellerophon. He was so bold, so fearless, and so handsome that those who ought to have been his friends became jealous of him. That means trouble, you know.

Bellerophon wished to travel. His king gave him letters on parchment to take to King Iobates of Lycia.

The king did not read the letters for ten days after Bellerophon came to Lycia. During those ten days there was feasting and dancing in honor of the new guest.

After the feasts of welcome were over, King Iobates read the letters and found that the one who sent them wanted Bellerophon punished for certain misdeeds which people said he had done.

It was a sharp trick to send such letters by the very person who was to be punished. King Iobates was puzzled as to what to do.

Then some of his wise men told him of the terrible chimera that was in the west of his kingdom. This strange creature had the head of a lion, the body of a goat, and the tail of a crocodile. Its breath was flames of fire, so the peasants said. Nobody dared to attack it.

"Just the thing," said Iobates to himself, and sent for Bellerophon.

"You are the one to rid my country of this terrible monster. Do you dare to try such a task?"

Brave Bellerophon answered, "I have no fear; my heart is pure; my strength is as the strength of ten. I will go." 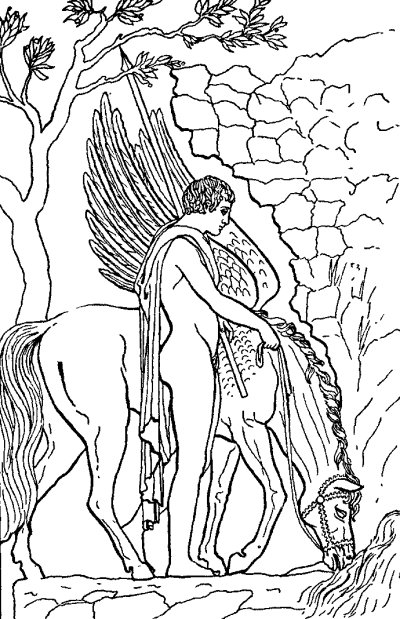 That night he slept in the temple of Minerva, the wise goddess. He dreamed that Minerva brought him a golden bridle and told him to go to the fountain of Pirene and find Pegasus.

When he awoke the golden bridle was in his hand.

He went to the fountain and there he saw Pegasus drinking. Bellerophon held up the bridle and for the first time Pegasus was caught.

The brave soldier leapt on the winged horse's back and Pegasus struck his hoofs once against the earth, and then sprang lightly towards the sky. He spread his wings and the nine Muses saw him sailing in the air with a rider on his back.

"He has found his work," said Clio.

Bellerophon could see over all the land. He found the terrible chimera and slew it. For all its strange shape and fearful looks, it was not such a fierce animal as he had feared.

Pegasus took his rider quickly back to King Iobates' palace and then vanished. He was found the next morning by the nine Muses drinking at their fountain.

Bellerophon was given another hard task to do when the king found that he had lived through his first.

Pegasus came at his call, and with his help everything was easy.

But as soon as one work was done King Iobates found another.

Bellerophon suspected nothing, and went bravely out to help his friend the king.

At last King Iobates said he had nothing more for him to do. After a time Bellerophon married the king's daughter and lived quietly at home in Lycia.

Pegasus, the pet of the nine Muses, became so gentle that he would let them soar to the skies on his back, but no mortal save Bellerophon dared to touch him.

Bellerophon, having no more great earthly tasks to do, called his winged steed one morning and dared to attempt to guide him to Mount Olympus, 011 whose lofty top sat the great Jupiter on his throne in the clouds.

Jupiter, seeing him coming, sent a single gadfly to sting the tender skin of Pegasus. The gadfly dealt a cruel blow and proud Pegasus thought Bellerophon had dared to strike him.

He reared upon his haunches and sent Bellerophon reeling downward to earth, the victim of a selfish wish to outdo others. Bellerophon fell upon a rocky field far from any city. His fall made him both lame and blind. Separated from his friends he wandered alone, living as best he could, and it is not known what became of him. His winged steed fled to the fountain on Mount Helicon, but never again came at his call. He could not forget the sharp sting of the gadfly.

Some have fancied that those who love the Muses see him even in these days, and that the flash of his golden bridle is caught by a gifted few once in each century.

If you use Facebook or Google+ & enjoyed Pegasus, The Horse With Wings, please tell your friends and let us know to find more like it for you!