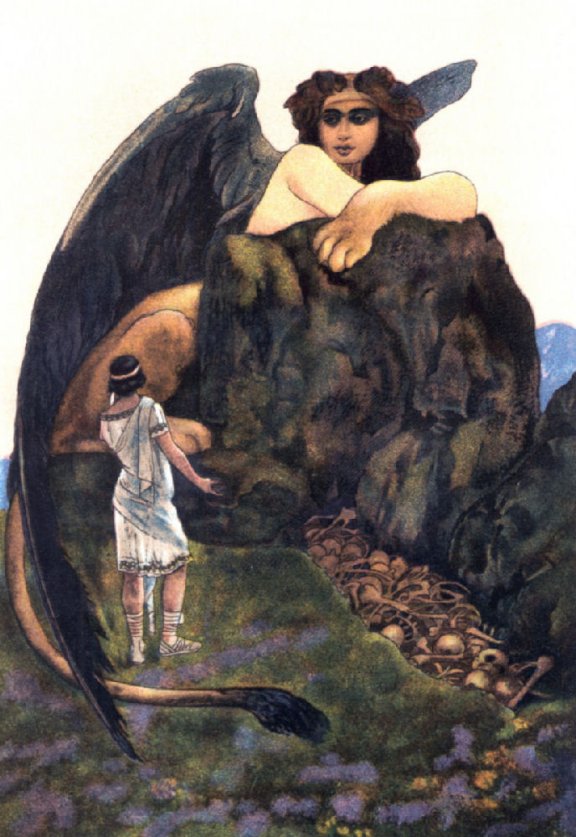 It befell in times past that the gods, being angry with the inhabitants of Thebes, sent into their land a very troublesome beast which men called the Sphinx. Now this beast had the face and breast of a fair woman, but the feet and claws of a lion; and it was wont to ask a riddle of such as encountered it, and such as answered not aright it would tear and devour.

When it had laid waste the land many days, there chanced to come to Thebes one Oedipus, who had fled from the city of Corinth that he might escape the doom which the gods had spoken against him. And the men of the place told him of the Sphinx, how she cruelly devoured the people, and that he who should deliver them from her should have the kingdom. So Oedipus, being very bold, and also ready of wit, went forth to meet the monster. And when she saw him she spake, saying:

Read me this riddle right, or die:
What liveth there beneath the sky,
Four-footed creature that doth choose
Now three feet and now twain to use,
And still more feebly o'er the plain
Walketh with three feet than with twain?

And Oedipus made reply:

'Tis man, who in life's early day
Four-footed crawleth on his way;
When time hath made his strength complete,
Upright his form and twain his feet;
When age hath bound him to the ground
A third foot in his staff is found.

And when the Sphinx found that her riddle was answered she cast herself from a high rock and perished. As a reward Oedipus received the great kingdom of Thebes and the hand of the widowed queen Jocasta in marriage. Four children were born to them - two sons, Eteocles and Polynices, and two daughters, Antigone and Ismene.

Now the gods had decreed that Oedipus should murder his own father and marry his own mother, and by a curious chance this was precisely what he had done. As a baby he had been left to die lest he should live to fulfil the doom, but had been rescued by an old shepherd and brought up at the court of Corinth. Fleeing from there that he might not murder him whom he believed to be his father, he had come to Thebes, and on the way had met Laius, his true father, the king, and killed him.

While he remained ignorant of the facts Oedipus was very happy and reigned in great power and glory; but when pestilence fell upon the land and he discovered the truth of the almost forgotten oracle, he was very miserable, and in the madness of grief put out his own eyes.

If you use Facebook or Google+ & enjoyed Oedipus And The Sphinx, please tell your friends and let us know to find more like it for you!