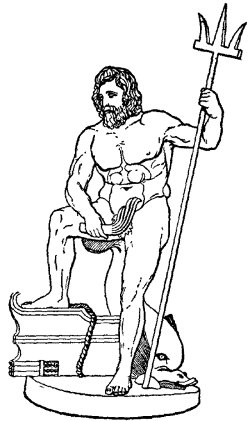 "Mother, when papa came back from South America, he told us a queer story about the sailors dressing up in masks. What holiday was it? And what did they do it for?"

"That must have been, Charlie, when the ship crossed the line, or the equator, as you call it in the geography class. I remember his telling about King Neptune and his trident."

"What did the sailors do, mother?"

"Why, one dressed to represent Neptune, a famous ocean god, and the rest masked as his followers. They were given presents by the passengers on the ship, and it was a grand holiday."

"But who is King Neptune, and where does this ocean god live, mother?"

"People used to believe that Neptune was really king of all the waters on the earth, Charlie. Doesn't that seem strange? I'll tell you a story that I heard about Neptune and some of the other gods whom the Greeks used to worship. Perhaps you will find more stories about him sometime."

"Wait a minute, mother, till I get that easy chair for you. Now we are ready to begin."

"Once on a time, Juno, the wife of Jupiter, while watching from the sky, saw some ships on the sea beneath her.

"After looking closely, she found they were the seven ships of Aeneas, who was trying to reach the land of Italy and was now only a few miles from its shore.

"Juno, for reasons of her own, did not want Aeneas to reach the land. Knowing something must be done in the shortest possible time she went to King Aeolus and asked his help. She promised him all manner of beautiful gifts if he would only send his winds against the ships of Aeneas.

"King Aeolus knew he was doing wrong, but he would not refuse Juno. He went to the mountain cave where he kept the storm winds, and, taking his heavy war spear, burst open the massive door of the cavern and let all the mad crew out at once.

"The storm they made was terrible. Great waves like mountains came sweeping over the land, carrying trees and everything away.

"The ships of Aeneas were only playthings in such a hurricane, and the winds seemed to know for what they had been let loose.

"The great cables that fastened heavy anchors to the ships were snapped like stalks of corn. The winds roared like wild animals. The sky was as black as night, and great waterspouts went whirling by like huge tops set spinning by the blasts.

"One fierce wind blew against the ship of Aeneas and overturned it.

"A whirlwind caught three other ships and tossed them lightly on the great rocks, on the shore. Another whirlwind sent three more ships into the terrible quicksands and they were swallowed up.

"Aeneas, swimming in the water, saw around him his trusty sailors clinging, like himself, to broken planks and pieces of timber. All about them floated concave shields, outspread mantles, and overturned helmets. Treasures, too, in the shape of precious home gifts, and robes covered with jewels, drifted past them.

"But the only thing anyone wanted then was life, and it seemed as if the winds and waters were ready and able to destroy every man of them.

"Aeneas called to Neptune, king of the seas, and Neptune heard him and came riding up out of the bottom of the ocean.

"He held his golden-maned horses firmly in check, while his voice roared over the waters, asking:

"'What is this, you winds, that you dare to trouble earth and sky without leave from me? Who let you free from your rock prison?'

"The waves were afraid and quieted down. The clouds scattered like naughty children caught in mischief. The winds flew home and, hurrying back into their cave, blew the door tight-shut with a bang. Then everybody waited to see what King Neptune would do.

"He ordered some of his ocean train to pry the three ships off the rocks, but they could not, and he had to help them with his trident, or three-pointed spear. Then King Neptune opened the quicksands and the other three ships sailed out on the water again.

"Neptune knew Aeneas was a brave man and always quick to answer a call for help, so the boat of Aeneas had been taken care of first, and he and his men were put back safely into it. 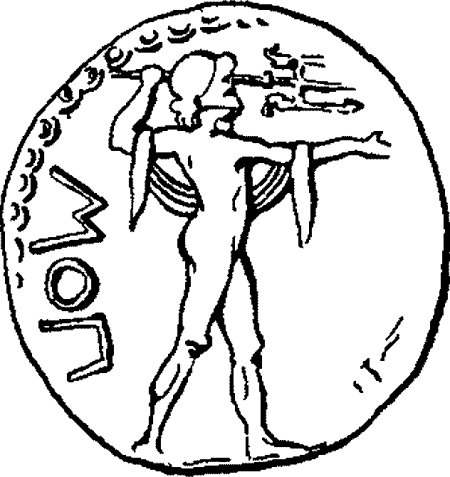 "King Neptune, seeing everything was quiet again, showed Aeneas a beautiful harbor where he and his sailors could rest. The brazen-hoofed steeds that drew Neptune's chariot were tossing their heads and growing restive. So Neptune called his followers, and in a flash they all disappeared into the depths of the sea.

"Jupiter, ruler of the sky, praised Neptune for his skill in checking the furious winds and maddened waves, and Pluto, ruler of the center of the earth, said he was proud to call him brother."

"Well, that must have made King Aeolus ashamed of himself. Don't you think so, mother?"

If you use Facebook or Google+ & enjoyed Neptune, King of the Seas, please tell your friends and let us know to find more like it for you!