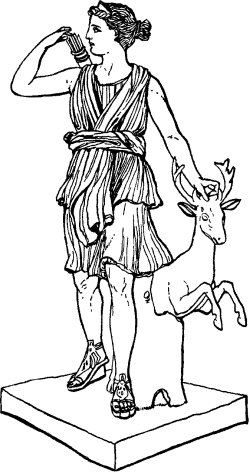 "When we were at grandpa's last summer, we used to stay out so long, playing under the trees in the dooryard, that nearly every night we saw the moon.

"Sometimes it was big and round, and sometimes it looked like grandpa's sickle, only it had no handle.

"And you ought to have heard the queer stories aunt Hattie told about the moon. Some of the stories were very funny, and some were very beautiful.

"Let's find a window where we can see the moon and then tell stories about it. Come, boys," and little Jack led the way.

"Here is a grand place to sit, Charlie. Right here, all of us together on this sofa, and you must tell us a story."

"This is one of the stories I like best; maybe you won't, though.

"Apollo, the god of the sun, had a twin sister named Diana. Apollo liked to hunt with his golden bow and arrow, and his sister loved him so much that she was always with him. He taught her how to use the bow and arrow as well as he could himself. Sometimes their mother would set up a target for them, and she was just as proud of Diana's quick eyes as of Apollo's strong hand, for no matter what they aimed at, Diana could shoot as well as Apollo. By and by, when Apollo had grown too old for idle sport, he was given the sun to rule over, and Diana begged for something just as grand to do. 'Such work is too hard for my brave girl,' her mother would say, but at last Apollo said he would help her, and so she was given the moon to rule over."

"Why, Charlie, how queer that sounds, for you know the sun does help the moon to shine," said Jack.

"Keep still, Jack; it is almost nine o'clock, and I can't stop to talk about the queer part; you must just watch for that," and Charlie went on with the story.

"Diana was as grand and proud, driving the silver chariot of the moon, as Apollo in his gold chariot of the sun. Sometimes, when her work was over, she left the moon and came to earth again to hunt. She would call her friends, the maidens she used to play with, and away they would go, each with a silver bow in hand and a quiver full of arrows fastened at their backs.

"One day, while they were hunting, they heard strange dogs in the woods. Each one of the girl hunters hid behind a tree and waited. Diana ran from her tree to a cave so that she could not be found. At last a foolish hunter came in sight. He seemed to act as if he knew he ought not to be there, and he wandered from left to right, as if he had never hunted before. Then he started for the very cave where Diana was hiding, for he knew by the willows a spring was there."

"Yes, he started for Diana's cave, but the minute he was near enough he felt a splash of water that seemed to cover him from head to foot and he heard Diana say:

"'Now go and tell, if you can, that you have seen Diana.'

"Poor fellow! He could not move. As he stood there he found his arms were changing to the straight fore legs of a deer. Horns came out of his head, his brown eyes grew bigger, and so did his ears, and in a few minutes even his own dogs did not know him. He bounded away, but his pet hounds sprang at him and caught him.

"Diana and her friends were miles away, and no one could save the poor fellow from the fate of a hunted deer."

"I thought it served him right, when I heard it," Charlie said. "He knew he had no right in Diana's forest, and she can't hunt in the moon, for they say there are neither trees nor animals there."

If you use Facebook or Google+ & enjoyed Diana, Queen Of The Moon, please tell your friends and let us know to find more like it for you!