There is an old story that tells how a man named Jason went on a long journey in search of a golden fleece.

He fitted up a great boat, and the bravest and strongest men of his country offered to go with him.

They had no ships like ours, in those days, and when the sails were not filled with wind, every man took an oar, and, with twenty oars or more on each side, the boat was made to move through the waves very swiftly.

The heroes in Jason's boat had all won fame before they started out on this voyage, and many were already warm friends. There was the great Hercules, and Orpheus, the sweet singer; Castor, who could tame the wildest horses, and his twin brother Pollux, who was the greatest boxer the world has ever seen, or perhaps ever will see.

These and many others sat side by side in this boat, which Jason called the Argo. Many strange things happened to them on their voyage after the golden fleece. One was when they were attacked by birds. They saw many new countries also, and one day the Argo sailed by a very strange island where nearly all the people lived underground. These people never plowed their land with the strong oxen, nor planted seed, nor reaped harvests. They had no flocks of woolly sheep, nor herds of cattle.

All day long they worked away under the surface of the earth, digging and digging at great black stones they found there. Then they sold these stones or rocks to people in other countries, and so bought bread for themselves.

These people, with their black faces and grimy hands, left their work for a little while when someone told them of the beautiful boat that was in sight. They looked very strange to those in the ship, for no one in the land from which the Argo came worked under the ground. In that happy realm everyone lived in the sunshine and worked in the open fields. But after a while the Argo sailed away from this home of the underground people and on beyond. Suddenly the sky was darkened and great flocks of giant birds flew thick and fast above them. Then the wind changed and the frightened rowers had to take the oars.

The sky grew black as night. Down shot a feather from one of the birds. It struck one of the rowers on the left shoulder and he dropped his oar, for the pain was like a spear-thrust. Down sped another arrow feather, so pointed and sharp that another rower who was hit had to drop his oar. Thicker and faster came these arrow feathers upon the bare heads and naked shoulders of the men at the oars.

The best archers shot back at the birds with their sharpest-pointed arrows, but not a bird was harmed.

"What shall we do?" shouted the men still at the oars.

"You will never kill those birds," said one who had seen their feather arrows before. "All that you can do is to cover your heads and let us, who are too badly hurt for rowing, help cover your shoulders with our shields." 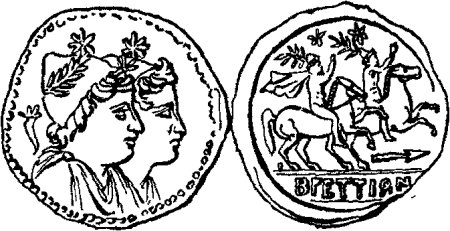 Then those at the oars put on their shining helmets; those who did not row held up the great war shields over them. The boat looked as if it had a roof. Down on the helmets came the feathers, so sharp that many of them made holes in the shining metal. Down on the shields they pelted, till it seemed as if the sky was raining drops of lead. The birds themselves came no nearer. But oh, their feather arrows were enough to frighten even these bravest of men.

The rowers worked as hard and as steadily as they could, and after a while they were out of reach of the terrible feathers.

The strange part of it all was that they never could find one of those sharp-pointed arrows with which the birds had shot them.

When the sun came out they were in a safe harbor. They looked and looked, but not a feather was to be found. One man declared that he knew the feathers were white.

"But the birds were black," said all the rest. "How could the arrows be white when even the sun was darkened by the black-winged creatures?"

How the dispute was settled I do not know, for the sharp-pointed feathers had melted all away, like hailstones from dark storm-clouds. It is certain, however, that the men never found any of the arrows with which they had been shot.

If you use Facebook or Google+ & enjoyed The Birds With Arrow Feathers, please tell your friends and let us know to find more like it for you!