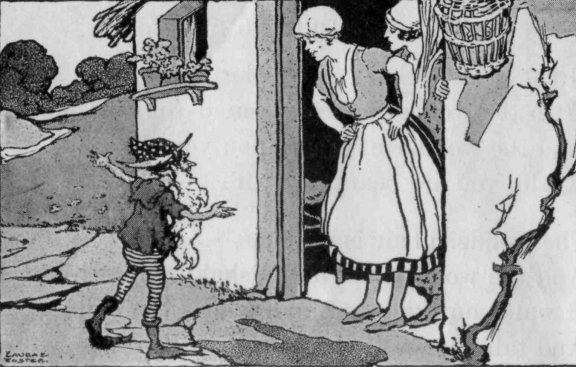 As every one knows, fairies are always just. They are kind to others, and in return they expect others to be kind to them. In some countries across the sea there are fairies called Hillmen.

Now, there once lived a certain housewife who liked to make bargains. She gave away only those things for which she had no use, and then expected always to get something in return.

One day a Hillman knocked at her door.

"Can you lend us a saucepan?" he asked. "There's a wedding on the hill, and all the pots are in use."

"Is he to have one?" whispered the servant who opened the door.

"Aye, to be sure," answered the housewife; "one must be neighborly. Get the saucepan for him, lass."

The maid turned to take a good saucepan from the shelf, but the housewife stopped her.

"Not that, not that," she whispered. "Get the old one out of the cupboard. It leaks, but that doesn't matter. The Hillmen are so neat and are such nimble workers that they are sure to mend it before they send it home. I can oblige the fairies and save sixpence in tinkering, too."

The maid brought the old saucepan that had been laid by until the tinker's next visit, and gave it to the Hillman. He thanked her and went away.

When the saucepan was returned, it had been neatly mended, just as the housewife thought it would be.

At night the maid filled the pan with milk and set it on the fire to heat for the children's supper. In a few moments the milk was so smoked and burnt that no one would touch it. Even the pigs refused to drink it.

"Ah, you good-for-nothing!" cried the housewife. "There's a quart of milk wasted at once."

"And that's twopence," cried a queer little voice that seemed to come from the chimney.

The housewife filled the saucepan again and set it over the fire. It had not been there more than two minutes before it boiled over and was burnt and smoked as before.

"The pan must be dirty," muttered the woman, who was very much vexed. "Two full quarts of milk have been wasted."

"And that's fourpence!" added the queer little voice from the chimney.

The saucepan was scoured; then it was filled with milk the third time and set over the fire. Again the milk boiled over and was spoiled.

Now the housewife was quite vexed. "I have never had anything like this to happen since I first kept house," she exclaimed. "Three quarts of milk wasted!"

"And that's sixpence," cried the queer little voice from the chimney. "You didn't save the tinkering after all, mother!"

With that the Hillman himself came tumbling from the chimney and ran off laughing. But from that time, the saucepan was as good as any other.

If you use Facebook or Google+ & enjoyed The Hillman And The Housewife, please tell your friends and let us know to find more like it for you!