Once upon a time, a wise raven lived in the top of the Giralda, the Moorish bell tower of the cathedral in Seville, Spain. The raven was old, so old that his head was not black, but gray. The tower, too, is old, and is crowned by the large, bronze figure of Faith which serves as a weather vane. For four centuries, el Girandello, the weather vane, has turned with the wind; and it was four centuries ago, that the raven was living in the tower. All day, he would sit on his perch, with his learned head cocked on one side as he sleepily studied the stonework of the belfry, or alertly discussed weighty matters with his bird comrades and with the wind. At night, he was often deep in talk with his special friend, the owl, who, when tired of roaming through the tops of the giant palm trees or of prowling into out-of-the-way nooks in the cathedral roof, liked to tell of his adventures. For, in night wanderings, the owl sometimes flew near the quiet Guadalquiver which flowed by Seville, and he heard the river murmur tales of the Tower of Gold on its bank; or he peered into the gardens of the Alcazar where Spanish kings had long had their palace, and heard, from the moonbeams, tales which, when repeated, made even the raven's sober thoughts turn sprightly.

What the raven liked best to hear was what the owl, or any one else, could tell of the Giralda itself or of the mighty Cathedral below the tower. For the raven cared for nothing in the world so much as he cared for this tall tower, up whose winding passage, of three hundred feet, men had ridden on horseback, almost to the very top. Yes, with his own eyes he had seen those riders. Before the days of the riders, in the time when the bells of the Giralda summoned the Moors to prayer, there had been, on the spire, four large, gilded, copper balls that shone like golden apples. After an earthquake had thrown down the copper balls, el Girandello was placed on the top of the dome. The raven considered himself the owner of el Girandello and, in truth, of all the Giralda. Who, but himself, had perched on the sills of the twin windows that looked out, high in the tower, over the white-roofed Seville? Who, but himself, had stood upon the helmet on the head of el Girandello? Not the owl! -- the raven saw to that! And not another bird of his acquaintance, surely! He knew himself to be the oldest raven in the world; he knew himself to be the wisest raven in the world; -- and he certainly owned the whole of the Giralda! 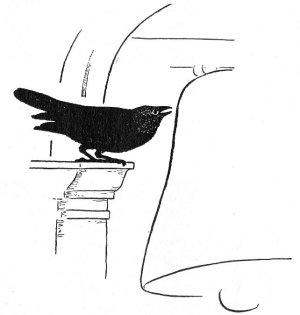 The raven, in short, was entirely satisfied with his belfry and its bells. It was a rectangular belfry, and on the four faces of the rectangular stage, high up, were inscribed the four words: Turris ... Fortissima ... Nomen ... Domini. The great bells, each christened with holy oil, had their own names.

There were Santa Maria and San Juan; there was la Gorda, or The Fat; there was brave San Miguel; there was el Cantor, or The Singer; and there was many another. At times, the bells rang softly through the still air that hovered over the flat-roofed city. At other times, they rang out with such noisy clamor that the vibration penetrated the houses farthest away, and the raven of the Giralda clung to his stone perch as closely as the leaves of the cocoa tree cling to their twigs.

The raven liked el Cantor better than all the other bells. He couldn't sing a note himself, but he liked this singing bell, with its especially clear tone. On spring evenings when the fragrance of orange blossoms and acacias filled the air, The Singer would peal forth such a glad note that the people down in the street would say, "El Cantor is feeling fine tonight"; and the raven, up in the tower, would croak loudly with him, though he never croaked with any other bell.

Now it happened that the wind, even more than the owl, was a friend of the raven. This was not only because the wind was usually a gentle, lovable, sunny-hearted fellow, but because he was always around the tower, day and night, whereas the owl hid all day. When the raven felt like talking, the wind was always on hand to listen. That was a friend worth having! The wind, too, often told capital stories.

One afternoon, the wind told the raven an astonishing tale. The wind had it from the owl who, in turn, had it from the passarinno -- that small, gray bird who sings like an angel. To this passarinno, the story had come down from his ancestor, of a much earlier time. That ancestor had told it to the wind of his day, who wafted it to the ears of King Alfonso, the Sage. Perhaps, in the later days, it had grown by traveling (passarinno to owl, owl to wind, wind to raven); for, when Alfonso, in the thirteenth century, wrote the tale in his big book of Cantigas, it wasn't just like the passarinno's story to the owl three centuries later. Would you like to hear the tale? Anyone may hear it. To believe the tale as it should be believed, and to understand it aright, you must be able to know the power of melodious sounds, as truly as the blind organist of Seville Cathedral knew that power. If you do not know anything about the music of the trees, or the music of the birds, or the music of the air, you may as well stop reading this story and gather nuts instead. Listen to the tale, if you will; here it is, as the wind told it to the raven.

'My voice is nothing compared to the voice of my ancestress -- the passarinna * who entranced the monk.' Now, pray, explain your words,' said the owl. The passarinno answered, pleasantly, 'Sit comfortably and I will tell you all.' They were in the garden of the Alcazar and were perched on a tall cocoa tree. The owl settled himself on a wide, sweeping leaf, and the passarinno perched himself on a leaf above.

'My ancestress,' the passarinno went on, 'was the most marvelous singer ever known. Her home was in the garden, just outside the Court of Oranges beside the Giralda, and when she was singing she would look up at the tower. But she rarely was heard by anyone, because she chose to live in the unfrequented part of the great garden. One morning a monk came, very slowly, along the path that led to the shrubbery where the passarinna lived, and my ancestress knew at once three things about that monk: first, that he was good; second, that he was old; third, that he was weary. The monk sat down, rather heavily, beside the fountain that was sending a cool, orange-scented, shimmering spray of water into the air. Leaning over the edge of the pool, he bathed his hands in the clear water and bathed his face. The passarinna could plainly see how refreshing, to the tired monk, the water felt; for there came into his face a look like the look on a parched tree when a shower renews it. The weary lines on the monk's brow passed away, as cloud-bars vanish from the evening sky, leaving fairness and tranquillity. He sat, for some time, with a smile on his face, looking up at the tree tops and at the Giralda beyond. 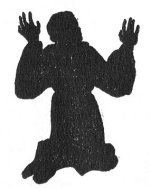 Then, kneeling down -- and his knees were not as stiff as when he entered the garden -- he prayed aloud that he might be permitted to know what the happiness of Paradise would be like. It was at that moment the passarinna -- marvelous ancestress of mine -- began to sing.

'The monk rose from his knees, and, with a smile on his face, seated himself in the thickest part of the shrubbery, where he could see the passarinna and where the passarinna could see him. That bird of birds sang on and on, now softly, now triumphantly, now wistfully, now ecstatically. There was such charm in her singing, all the leaves forgot to rustle. There was such charm in the melody, the water in the fountain ceased moving -- the breezy air was hushed and wondering -- the day faded imperceptibly into night, and the stars came nearer earth to hear the song. Still the passarinna sang on and on and on. Still the monk listened happily, with an exalted look in his eyes, and was unaware of the passing of hours or of days. As the passarinna continued her heavenly song, time itself stopped, though life went on.... The monk listened, listened in rapture, while joyous satisfaction held his whole being ......... 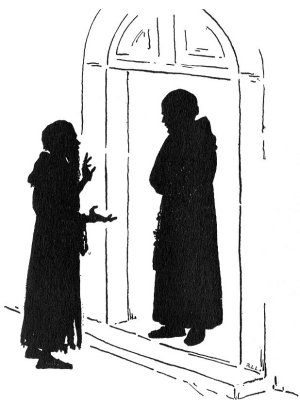 'Late one afternoon,' went on the passarinno, 'there came to the door of the monastery near the Giralda, an aged, worn-looking man, long-bearded, and in shabby monk's dress. The prior himself answered his knock and said, "Who are you, poor stranger, and what do you want?"

I heard a bird sing, and I was so entranced with the song I may have stayed away too long."

'The prior and the brother monks who had now come to the door looked at one another in surprise, and said, in low tones, "He is evidently not himself. . . . The man does not know what he says."

'The prior then spoke to the man, kindly, saying, "What is your name?"

'The oldest monk among those at the door now looked thoughtful. It was to him that the others always turned whenever any knowledge of the past was wanted. "Attend my words," he suddenly said to the prior. "Three hundred years ago a brother monk, named Jubilo, wandered off and was never again seen. My Father -- my brother monks -- I am of the opinion that we have before us, this day, a true marvel! I am sure this poor monk and that Jubilo, of three hundred years ago, are the same!"

'Then the prior, believing, took the monk warmly by the hand and brought him into the monastery, and all rejoiced.'

'That, 'said the passarinno to the owl, 'is the story of my ancestress, the passarinna of long ago. The Giralda knows I speak truth.'

And the wind, as he finished the tale, remarked, "That's all the story, sir; but the passarinno does speak truth."

"Truth it is," replied the raven, "and I'll keep the story going."

Then the sunny wind brushed the tail feathers of the raven and blew along his leisurely way, through the streets of Seville.

The raven sat stolidly in his niche, gazing with keen eyes at the city spread out below the Giralda -- its flat-roofed houses gleaming in soft colors, from blue and gray to palest pink. He watched the women watering their carnations on the roofs. He saw the motionless, dusky Guadalquiver, in the late afternoon light. His eyes followed the group of boys coming to the Cathedral to practice their solemn dance. Turning his wise, old head, he looked toward the gardens of the Alcazar, then down at the Court of Oranges, and at the roof of the vast Cathedral below him -- its parapets, and buttresses. His roving gaze went all over the city until sundown. The bells of the Giralda sent out their evening peal, and el Cantor's vibrating tone fell softly on the waiting breeze. The raven sturdily croaked, croaked, until el Cantor stopped singing; then, humping himself into a ball, he tucked his head under his feathers and went to sleep.

If you use Facebook or Google+ & enjoyed The Raven Of The Giralda, please tell your friends and let us know to find more like it for you!