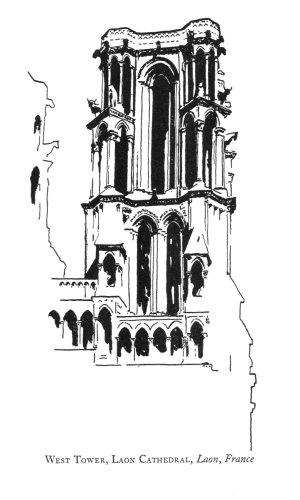 Grand-Pere Jean sat on a low bench outside the doorway of his little cottage on the Laon hillside. As far as his old eyes could see were sunny vineyards with giant trees beyond -- trees that had been part of the forest of St. Gobain when Charlemagne was crowned king of the Franks. Wherever the old man looked were fields gay with poppies, and a landscape that smiled. Little Francois, bare-kneed, and clad in black apron, looked up from his marbles on the ground and said, suddenly, in his direct way, "Grand-pere, you will tell me about the ox that helped?" And he looked toward the Cathedral.

From the doorway of the cottage, they saw the towers of the Cathedral -- the two, octagonal belfries, with the huge oxen and horses guarding the summits. From lofty stalls, the animals gazed over the V-shaped valley that was now filled with the clear, abundant sunlight of early afternoon. Grand-pere Jean's quiet hands rested on his cane as he tranquilly gazed at the Cathedral towers which were so still, so still, against the sky. The boy aimed one more marble at its enemy marble, then leaned back against the wall of the cottage.

"Grand-pere," repeated Francois, with a tiny show of authority, "You will begin the story? . . . You know the one -- about the ox that helped?"

"But yes," assented the grandfather, without moving his peaceful hands, "the ox that helped! Listen well, now, my Francois! It was years and years ago . . ."

"Last time you told it you said it was before you were born," interrupted Francois.

"But yes, my child, before I was born, that is true; years ago, it was, centuries ago. Count back, Francois, count back with me -- twenty, nineteen, eighteen, seventeen, sixteen, fifteen, fourteen, thirteen . . . the thirteenth century it was -- about seven hundred years ago, when the men of Laon were building up, again, the great church. Our France had been having a hard time. Our Laon had been having a hard time. This town had had to fight for its liberties. It had had to fight against the invaders, and this, too, though Laon was one of the three great fortresses. For know this, Francois -- La Fere, and Reims, and Laon -- these are the fortresses -- the fortresses then and the fortresses now."

"The fortresses I know all about," said Francois, as he made a triangle with three marbles. "Here they are."

"Now, Francois," went on his grandfather, "I tell you it was no easy thing the men of Laon had to do after our great church had been burned by the invaders. They had to build the church anew. They had to carry the great stones from the ancient quarries in the low valley down there," -- and Grand-pere Jean pointed down the hillside. "They had to carry the great stones, from the plain, up the steep hill, every day, so long as stones were needed to build up this church of ours. And, I tell you, my Francois, when young Enguerrand fought with the lion that lived in the woods between Laon and Soissons, he had no harder task; for it was only once that Enguerrand fought -- he fought the lion just once, and killed him. But these men, these sturdy men, worked day after day with all their strength, for months and months. They found the work hard, hard."

"And the oxen?" put in Francois.

"But yes, the oxen were the biggest helpers of all," continued Grand-pere Jean. "They and the horses dragged the carts laden with the stones or with the heavy wood, but the oxen were stronger than the horses. All day long, from morning till night, the patient oxen toiled up the steep hill slowly, slowly, with their loads. And, Francois, let me tell you, they wanted to draw the loads. Yes, they climbed the hill eagerly, every time. You could tell by looking at them how glad they were to help. They never had to be urged."

"You didn't see them, Grand-pere," said Francois firmly, though in a half-questioning tone.

"No, Francois," said Grand-pere Jean, "I didn't see them, but I know how they looked."

"Now it happened that the sun was very hot one day," went on his grandfather, "hotter than usual; and four oxen, dragging up a heavy load of stones, suddenly stopped. My faith, but one of those oxen was tired out! Too tired the poor beast was to take another step! The good driver, Pierre, unhitched the ox from the cart to let him rest at the side of the road. As the tired animal lay down on the grass, his beautiful, large eyes looked up at his kind master gratefully.

"'Pauvre bete! Reste ici!' said Pierre in an encouraging tone; and the tired ox was glad, indeed, to stay there."

"But, now, how could the cart go on? How could another ox be put in place of this one? All the other carts were already at the top of the hill. Unlucky Pierre was in despair. What could he do? . . . What could he do?" 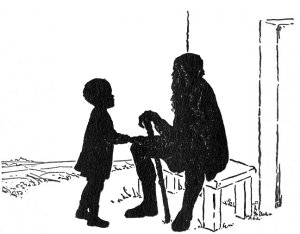 Francois jumped up to stand by his grandfather, and repeated eagerly, "What could he do? -- What did he do, Grand-pere?"

"Listen well," replied his grandfather. "He prayed, my Francois; and, when he rose from his knees, he saw a strong ox which had come from the trees at the other side of the road. This ox now stood beside the cart as if asking to be allowed to help. With a big gladness in his heart, Pierre fastened him to the cart, and look now -- the heavy load, drawn by four oxen as before, was at the top of the hill in front of the great church in no time!"

"Where did the ox come from?" asked Francois.

"No one knew," answered the old man. "No one ever knew. When Pierre asked the men at the top of the hill if they knew who owned the animal, he was told that no one had ever seen him before. And -- what do you think! -- even while the men were talking about him as they unloaded this last cart, the stranger ox somehow disappeared! He disappeared, my Francois, as quickly as he came, and was never seen again. But a boy told Pierre that he saw the ox go back to the woods. 'The ox went right into the woods,' the boy said. The men searched and searched everywhere, but find him they could not."

"And the tired ox?" asked Francois.

"But yes," said Grand-pere Jean, "truly, the tired ox! When Pierre had finished his work he walked down the hill to see him, and -- now listen, Francois -- he found that tired ox on his feet, as well and strong as ever!"

"Good!" said Francois; "there they all are now!" The boy looked up at the towers.

"Those good animals deserve to be there," said his grandfather; "they deserve it -- the oxen, and, yes, the horses, too. Patient they were; so willing to help they were! So glad to help and so ready to drag the heavy loads! No wonder they were rewarded by being carved in stone and placed on the towers for everyone to see -- century after century! Good beasts! Good beasts!"

As Grand-pere Jean ended his story he looked up at the Cathedral towers gleaming in the afternoon light, and nodded his head many times. Francois, too, kept looking at the towers. Beneath the arcades of the upper portion of the two-storied belfries, the immense figures of the oxen jutted out strong and clear against the blue sky.

"Grand-pere," said Francois, after a minute or two, "tell me -- do you know which ox up there is the ox that helped the tired one?"

"No, my Francois," replied his grandfather; "nobody knows that -- no one knows which is the ox that helped."

"I do," said Francois, simply. Then he turned to his marbles and began a new game.

If you use Facebook or Google+ & enjoyed The Ox That Helped, please tell your friends and let us know to find more like it for you!