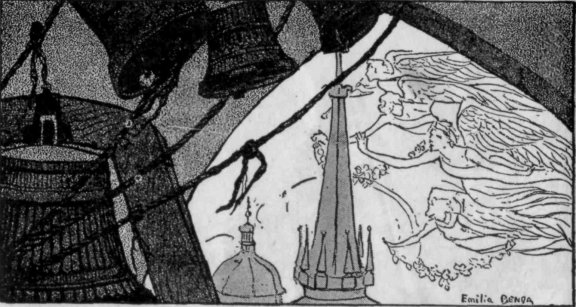 Long, long ago, in a far away city, there was a large church. The tower of this church was so high that it seamed to touch the clouds, and in the high tower there were three wonderful bells. When they rang, they made sweet music.

There was something strange about these bells. They were never heard to ring except on Christmas eve, and no one knew who rang them. Some people thought it was the wind blowing through the tower. Others thought the angels rang them when a gift pleased the Christ Child.

Although the people did not know what rang the bells, they loved to hear them. They would come from miles around to listen to the wonderful music. When they had heard the bells, they would go out of the church, silent but happy. Then all would go back to their homes feeling that Christmas had come, indeed.

People sometimes asked one another, "Do you suppose the bells ever did ring?"

"Yes," said one very old man. "I have often heard my father tell how beautifully they rang on Christmas eve. There was more love in the world then."

Every Christmas eve the church was filled with people who waited and listened. They hoped that the bells would ring again as they had rung long ago. Though many gifts were laid on the altar, still the bells did not ring.

Christmas was near at hand again, and every one was happy.

Not far from the city two little brothers lived on a farm - Pedro and Little Brother.

Their father was poor and had no gift to lay on the altar. But Pedro had saved all his earnings, and he had one shining silver piece. His father had promised the little boys that they might go to the church on Christmas eve and take the gift.

It was quite dark when the lads started on their way to the city. The snow was falling fast, but they buttoned their little jackets close about them and walked along briskly. They were not far from the church when they heard a low whine of distress. Little Brother, clinging to Pedro in fear, cried, "What is it, Pedro, what is it?"

Pedro ran across the street, and there under a small heap of snow, what do you think he found? A little black and white dog, shivering with cold, and nearly starved. Pedro opened his jacket, and put the dog inside to keep it warm.

"You will have to go to the church alone, Little Brother," Pedro said. "I must take this little dog back to the farm, and give it food, else it will die."

"Won't you please go and put my gift on the altar, Little Brother? I wish so much to have it there to-night."

He took the gift and started toward the church. Pedro turned and went home.

When Little Brother came to the great stone church and looked up at the high tower, he felt that he could not go in alone. He stood outside a long time watching the people as they passed in. At last he entered quietly and took a seat in a corner.

When Little Brother went into the church, all the people were seated. They sat quietly hoping that at last the bells would ring again as in the days of old.

The organ pealed out a Christmas hymn. The choir and the people arose, and all sang the grand old anthem. Then a solemn voice said, "Bring now your gifts to the altar."

The king arose and went forward with stately tread. Bowing before the altar, he laid upon it his golden crown. Then he walked proudly back to his seat. All the people listened, but the bells did not ring.

Then the queen arose and with haughty step walked to the front. She took from her neck and wrists her beautiful jewels and laid them upon the altar. All the people listened, but the bells did not ring.

Then the soldiers came marching proudly forward. They took their jeweled swords from their belts and laid them upon the altar. All the people listened, but the bells did not ring.

Then the rich men came hurrying forward. They counted great sums of gold and laid them in a businesslike way upon the altar. All the people listened, but the bells did not ring.

"Can I go all alone to the front of the church and lay this small gift on the altar?" said Little Brother. "Oh, how can I? how can I?"

So he slipped slowly around by the outer aisle. He crept quietly up to the altar and softly laid the silver piece upon the very edge.

And listen! What do you think was heard? The bells, the bells!

Oh, how happy the people were! And how happy Little Brother was! He ran out of the church and down the road toward the farm.

Pedro had warmed the dog and fed it, and was now on the way to the city. He hoped that he might see the people come out of the church.

Down the road Little Brother came running. Throwing himself into Pedro's arms, he cried, "Oh, Pedro, Pedro! The bells, the bells! I wish you could have heard them; and they rang when I laid your gift on the altar."

"I did hear them, Little Brother," said Pedro. "Their sound came to me over the snow, - the sweetest music I ever heard."

Long years after, when Pedro grew to be a man, he was a great musician. Many, many people came to hear him play.

Some one said to him one day, "How can you play so sweetly? I never heard such music before."

"Ah," said Pedro, "but you never heard the Christmas bells as I heard them that Christmas night years and years ago."

If you use Facebook or Google+ & enjoyed The Christmas Bells, please tell your friends and let us know to find more like it for you!