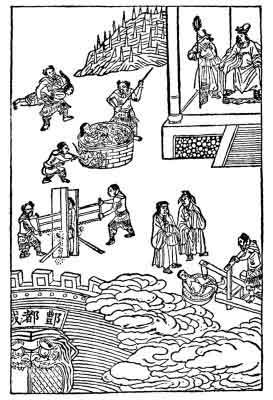 Ch'uan Ju-Yu of Pu-Hai was a poor man, but he was never tired of doing every good and charitable work in his power. He also employed himself indefatigably, although he was often in poor health, in copying many good books to be distributed among his neighbors. When he was asked why he exerted himself so much in spite of his physical weakness, he replied that he was not trying to seek any reward, but simply wanted to give relief to his mind, which could not be kept idle for one moment.

One day he went to sea, and encountering a strong gale, found himself stranded on a lonely island. The scenery was very beautiful and he was full of joy, when suddenly there appeared to him a Taoist scholar who said: "The world delights in hypocrisy, but the Lord on High praises sincerity. You have hitherto done good work in distributing sound moral tractates, and this not for the sake of courting a good opinion of yourself from others, but simply from pure unaffected good-will., So much the more praiseworthy are your deeds in the eyes of our Lord. Many scholars are clever enough, yet they do not employ their talents for the true cause; they abuse them in writing immoral, seditious books; but they are now suffering in the infernal regions the consequences brought on them by their own acts. I shall take you there and let you see by way of contrast how much better your fate is."

Then they went through space to that strangest of lands. The Taoist explained everything they saw there. All kinds of torture were being applied to those immoral writers, who, while in the world, stirred up man's beastly nature and allured many good people to an early downfall. The stranger also showed him a stately-looking man in the palace, who had been a good, upright officer when on earth, punishing every crime that tended to disturb social and political peace, and was now superintending this department in the world below.

When the visit was over, the Taoist scholar brought Ch'uan back to the same island, where he secured a sailboat and finally succeeded in reaching his home. Ever since, he is wont to tell his neighbors how horrible the scene was which he had seen on his visit to hell.

[The peculiar attraction of this story is in its parallelism to Dante's Inferno. The Chinese characters over the entrance of hell are, Feng Tu Cheng, which means verbatim "The Inferno's Fortified Castle." The last two characters, taken as one word, form the common term for capital, and so we might translate it briefly by "The Capital of Hell."

If you use Facebook or Google+ & enjoyed A Visit To Hell, please tell your friends and let us know to find more like it for you!