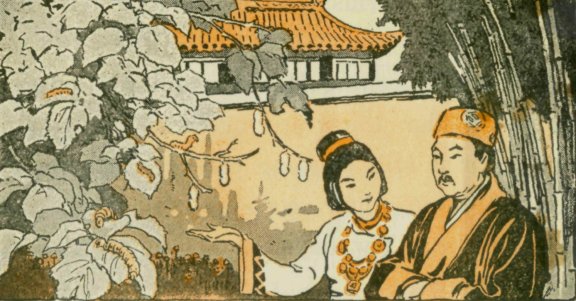 Hoangti was the emperor of China. He had a beautiful wife whose name was Si-ling. The emperor and his wife loved their people and always thought of their happiness.

In those days the Chinese people wore clothes made of skins. By and by animals grew scarce, and the people did not know what they should wear. The emperor and empress tried in vain to find some other way of clothing them.

One morning Hoangti and his wife were in the beautiful palace garden. They walked up and down, up and down, talking of their people.

Suddenly the emperor said, "Look at those worms on the mulberry trees, Si-ling. They seem to be spinning."

Si-ling looked, and sure enough, the worms were spinning. A long thread was coming from the mouth of each, and each little worm was winding this thread around its body.

Si-ling and the emperor stood still and watched the worms. "How wonderful!" said Si-ling.

The next morning Hoangti and the empress walked under the trees again. They found some worms still winding thread. Others had already spun their cocoons and were fast asleep. In a few days all of the worms had spun cocoons.

"This is indeed a wonderful, wonderful thing!" said Si-ling. "Why, each worm has a thread on its body long enough to make a house for itself!"

Si-ling thought of this day after day. One morning as she and the emperor walked under the trees, she said, "I believe I could find a way to weave those long threads into cloth."

"But how could you unwind the threads?" asked the emperor.

She put the cocoons in a hot place, and the little sleepers soon died. Then the cocoons were thrown into boiling water to make the threads soft. After that the long threads could be easily unwound.

Now Si-ling had to think of something else; she had to find a way to weave the threads into cloth. After many trials, she made a loom - the first that was ever made. She taught others to weave, and soon hundreds of people were making cloth from the threads of the silkworm.

The people ever afterward called Si-ling "The Goddess of the Silkworm." And whenever the emperor walked with her in the garden, they liked to watch the silkworms spinning threads for the good of their people.

If you use Facebook or Google+ & enjoyed The Goddess Of The Silkworm, please tell your friends and let us know to find more like it for you!