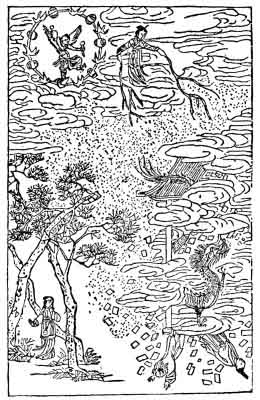 Shen of Tai-Ts'ang was wealthy, but a brutal and inhumane man who treated his fellow-citizens shamefully, and especially exhibited his bad character in damaging their instruments and machines, or any utensils which were used by workers in tilling the soil, manufacturing, fishing, hunting, and other occupations of life.

Once when he was building a guest hall in his house, he hired Liu of a neighboring village, well known as a skilled sculptor, to carve some figures on pillars and beams; but when the artist had finished his work Shen refused to pay him the stipulated sum. The sculptor remonstrated and the dispute was finally settled by a lawsuit against Shen, who for this reason began to scheme for revenge.

Some time later, the Buddhist Priests in a southern metropolis intended to have the statues of five hundred Arhats carved for their temple, and having heard of Liu's fame, invited him to compete for the task. Shen thought his opportunity had come. So he hired a man to join Liu's party. While on the way, this villain, following the instructions of Shen, spoiled the instruments of the sculptor and absconded without being discovered. When Liu on his arrival could use none of his tools he was unable to compete with the native sculptors, whereby he lost his employment and became quite destitute.

Since Shen continued in his evil practices, his daughter-in-law warned him that unless he reformed, heaven would certainly visit the family with misfortune; but Shen resented her words and drove her from his home charging her with impudence, and disobedience. Before she was more than a mile or so away from the house, there came a sudden terrific outburst of thunder and lightning, and she hid herself in the woods near by. Then she saw a scarlet dragon come out of the black clouds and enter Shen's residence. The building was completely wrecked, everything inside destroyed and every living thing instantly killed. No member of the family escaped, except the daughter-in-law who had been driven out. Heaven favored her and she lived a long and prosperous life.

[Our illustration exhibits the typical Chinese conception of thunder and lightning. The thunder demon holds a mallet in either hand and is surrounded by a circle of drums and flames. Lightning is represented as a woman from whose hands flow streams of flame.]

If you use Facebook or Google+ & enjoyed The Storm Dragon, please tell your friends and let us know to find more like it for you!