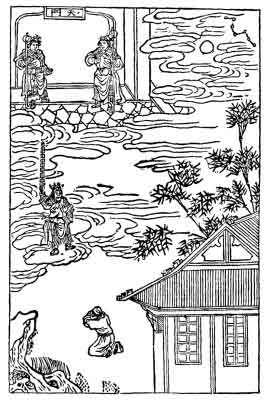 P'ang Heng-Hsiu organized with his friends an association the purpose of which was to worship the Northern Constellation. He observed all necessary religious disciplines and recited the sutras with reverence. One day, however, he became so intoxicated that he forgot himself. He stripped off his garments and slept facing the north. Waking up in the night, he showed his disrespect toward the constellation, when suddenly he heard a series of thunderclaps in the northwestern quarter, and lo! the gate of heaven was thrown wide open. Awed by this unexpected turn of affairs, P'ang hastily put on his clothing and was at the point of paying due homage to the Lord, when a god with dark face and dragonlike whiskers, carrying a golden rod in his hand, came down from above. He severely censured Pang for his offence, saying: "You have organized a religious society yourself and are well aware of the sacred laws. Therefore, your violation of them becomes doubly punishable."

P'ang humbly begged for divine mercy, excusing his deportment by the temporary derangement of his mind.

The god said: "The reason why men of good behavior are free from blame, is that they never relax their moral vigilance at any moment. Remember the story of Ch'u Pai-Yu who at night passed by the royal palace, yet he dismounted from his carriage as was customary to do in the daytime, and paid proper reverence to the Imperial house. People are still praising his unparalleled sincerity. Even in darkness men must not unbridle themselves and yield to their wanton passions. We will let you go at present, but you will have to suffer for your offence later on in life by receiving some civil punishment."

Ever since, P'ang shut himself up in his house and did not dare to go outside lest some misfortune should befall him. But how could a poor mortal escape heavenly ordained punishment? One day he received an invitation from one of his honorable relatives who had just been promoted to an eminent official position at the capital. He accepted gladly and went to the capital. While there, he went out and in at pleasure. Once he passed by an Imperial shrine, and, not knowing the official regulations, kept on riding apace. Thereupon the guard of the shrine arrested him for the offence, and the judge sentenced him to one hundred stripes. Fang then came to realize the significance of the divine prophecy.

[The Northern Constellation, called in Chinese "the Bushel" and in Western countries "Ursa Major," is sacred to Ti Chun, (the Lord Superior), and any intentional irreverence shown to it is regarded as disrespect toward the good Lord himself. Our illustration shows a messenger of Ti Chun stepping forth from the gate of heaven to warn the trespasser.]

If you use Facebook or Google+ & enjoyed The Northern Constellation, please tell your friends and let us know to find more like it for you!