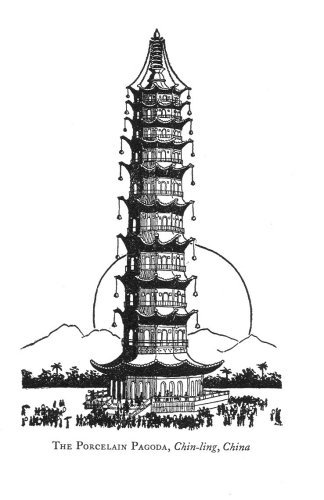 The mid-autumn moon was shining on the high pagoda that stood outside the Red Bird Gate, the southern entrance to Chin-ling, China. Wing Ling (Peaceful Forest), a wide-awake boy, had just this moment remarked that he hoped the moon would shine bright enough to drop down money for heaps of moon-cakes. He and his brother, Li Sun (Pear-tree, Son-of-Li), were sitting on the lowest of the four wide steps leading to the broad, octagonal base of the Porcelain Pagoda. "Liu li t'a" was its real name, that is, Vitreous-substance-of-liquid-gems-pagoda. Early in the fifteenth century, the emperor, Yung-lo (Eternal Joy), had the pagoda erected as a token of gratitude to his mother, the Heart-of-kindness-showing, Ever-gracious Em-press. The people of Chin-ling sometimes called it "The Temple of Gratitude," but to Wing Ling and Li Sun it was always the Porcelain Pagoda, because of the colored slabs of glazed porcelain--green, yellow, and red--which covered the brick-work.

Wing Ling and his brother had often seen the pagoda in the daytime when it looked gay and airy, especially when glittering sunshine fell upon the painted balconies, the delicately carved balustrades and porcelain slabs. Only once a year, were the boys allowed to see it at night--the night of the moon-festival. When the mid-autumn moon was biggest and roundest, a festival, all the moon's own, was celebrated by everyone, and, on this night of nights, Chinese children had the fun of eating delectable moon-cakes if the moon showered down money enough to buy the cakes. Li Sun said now that he noticed the moon was shining brighter than usual and probably the brightness would make a bigger moon-shower! The two boys, seated on the pagoda step, were easily unobserved, for men, women, and children in holiday dress were coming and going in such throngs that no one paid any attention to them. The moon--the splendid, round moon with the rabbit at its lower edge--was the only important thing tonight.

Moonlight and lantern light were vying with each other in illuminating the Porcelain Pagoda. By moonlight, the slender, octagonal building, mounting story by story far toward the sky, looked mysterious, fantastic, unreal. As if moonlight were not enough, a hundred and forty lights were gleaming from top to bottom of the pagoda. The seventy-two windows, eight in each story, were now ablaze with lantern light. As if gayety and mystery and lights were not enough, two hundred little bells, some of brass, some of porcelain, were softly tinkling in the slight breeze. For, from the golden ball and pine-apple that crowned the metal spire, chains of bells hung down to the angles of the highest roof, and more bells hung from all the corners and edges of the nine roofs. Tonight, the melody of the bells was like the melody the Great River--the Yangtze River--makes at its source where it flows, in rippling beauty, over golden sands.

"Li Sun," abruptly said Wing Ling, "do you know this Porcelain Pagoda never throws any shadow toward the west? The priests say so, and they must know, because they have charge of the pagoda and they protect all the images of the idols and saints--two thousand of them--here in the pagoda. And the priests know all about . . ."

"I know it's time for the moon-cakes to be eaten," interrupted Li Sun.

"I'll tell the moon-tale first," said Wing Ling, "or perhaps there'll not be any moon-cakes." Yet, as he spoke, the rascal knew that luscious moon-cakes were, this minute, in the large, inner pocket of his sleeveless jacket, and in Li Sun's pocket, too. Moon-cakes with glistening, round, sticky places on them! Moon-cakes that had on them little, sugar rabbits! Moon-cakes that had a bulging sugar toad! No wonder Li Sun thought it time to eat the moon-cakes! No wonder Wing Ling felt happy at the mere thought of them!

"Tell the tale, then," said Li Sun, cheerfully laying aside his great hunger, because he knew that his older brother who liked so much to talk wouldn't eat till the story was told.

"Here it is," began Wing Ling, as he and Li Sun wriggled themselves back into the corner of the step to be out of the way of people's feet. "Once the Emperor, Ming Wong, was walking in the moonlight--moonlight just like this; and he was on a terrace . . . "

"The Feng Huang terrace? Where the three phoenix birds sang, one springtime, so wonderfully all the other birds came to listen?" asked Li Sun eagerly.

"I forget. Perhaps it was that terrace--perhaps another. He was walking up and down, and his courtiers were with him . . ."

"How many courtiers?" broke in Li Sun.

"Interrupt me not, O Small-Devil," said Wing Ling, "or I stop telling the tale. The Emperor, with his flute in his hand, was walking up and down, when he asked one of his courtiers this question, 'Of what is the moon made, Noble-Servant?'

"The courtier said to the courtier standing nearest him, 'His Highness, the Emperor, asks of what the moon is made.'

"The second courtier quickly turned to another courtier, saying, 'His Highness, the Emperor, asks of what the moon is made.' The third courtier asked a fourth courtier; the fourth asked a fifth; the fifth, a sixth; the sixth, a seventh; and the seventh courtier ran as fast as the men ran who were sent by the Great Ch'in to find the dragon. I tell you, Li Sun, they ran fast! The seventh courtier ran, like the red fire, to catch up with a magician walking toward the city wall, and he did catch up with him, and seized the magician's garment. Out of breath he was, after that run, but he panted these words, 'The Emperor, His Royal Highness . . . would know . . . of what . . . the moon is made.' Without a word, the magician turned at once and ran back all the way to the terrace where the Emperor was still walking, still looking at the moon. Prostrating himself on the ground before the Emperor's feet, the magician said, 'Would His Highness, the Emperor, like to visit the moon and see of what it is made?'

'Let it be so!' replied the Emperor.

"The magician instantly threw his staff into the air toward the moon, and, lo, a rainbow bridge from earth to moon! As soon as the Emperor and the magician had stepped upon the bridge it rose beyond reach of the astonished courtiers and became like a wisp of cloud. 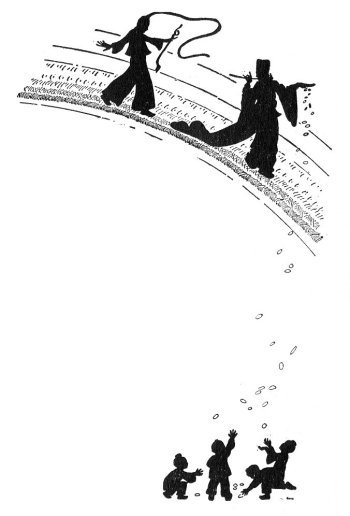 "The Emperor and his guide walked as easily as anything right along the rainbow bridge toward the moon, and I tell you, Li Sun, the moon shone amazingly bright, the nearer they went. When they stepped from the bridge to the surface of the moon, the Emperor noticed that most of the golden shining came from the thick groves of cassia trees--yes, Li Sun, the moonlight came straight from the cassia trees which were in full flowering. At the foot of a tall cassia, near the end of the bridge, crouched a little, white jade hare.

'Who is he?' asked the Emperor.

'That is He-who-pounds-drugs-for-the-Genii,' answered the magician. 'He uses the cinnamon bark for the drugs. On clear nights in mid-autumn you can see him from the earth.'

"The Emperor and the magician then walked along the broad avenues of the pale yellow cassia trees and saw, on either side, radiant palaces, sparkling towers and twinkling streams. Fair ladies, in rainbow-colored robes, came out to meet them, and, after bowing and smiling and saying welcoming words, passed on their way. Strange flowers, that looked far away though they were near at hand, covered the fields with silver-white or golden bloom. Snowy-white birds, with eyes like stars, flew in and out the golden cassia branches. Ah, it was a great glory, there, on the moon, Li Sun! And it's the same moon that shines down here tonight on this pagoda. But there's more to the story."

"The magician said to the Emperor," went on Wing Ling, 'Do you see that frog?'

"Then the magician told him this story: Once the Pearl-of-Heaven, the Moon, was about to be swallowed by a dragon, when an Archer Lord shot arrows into the sky, and so saved the moon from destruction. The Archer Lord was rewarded by a gift of a pill which would make him live forever. But, afterwards, his wife stole the magic pill and fled to the moon. That didn't help her any, for, as soon as she stepped upon the - grass of the moon, she was turned into a frog. Here in the moon she still lives. Are you awake, Li Sun?" suddenly asked Wing Ling.

"Hear now the ending," said Wing Ling. "When the Emperor and the magician left the moon and were coming down the rainbow bridge, the Emperor spoke not a single word, but he played on his flute. As he played, lovely strains fell to earth. Then he took coins, from the pouch on his girdle, and threw them from the bridge, and the money dropped at the feet of children. Wasn't that fine, Li Sun?--Don't you wish . . .?"

But just then a man and a woman, dressed in brightest of embroidered silk robes, bent over the two boys, who jumped to their feet as the man's words carne like a swift stream pelting down a steep mountainside.

"O wicked boy, Wing Ling!" exclaimed the man. "O abominable urchin, Li Sun! Why, oh, why, have you been hiding from your honorable parents all this long time? What have you been doing? Where have you been? We have walked hour after hour searching for you. We have called on metal, wood, water, fire, earth. We have earnestly petitioned them all to direct us to the greatly-desired-place-of-hiding of our disobedient and much-to-be-despised sons. We have begged them, implored them, to lead us to that hiding-place wherever it might be--whether on the bank of the Great River or in some spot in our pride-of-the-heart city of Chin-ling, our wide city that lies between the dragon's paws. 'Tis well I propitiated the deities by my worthy contribution toward the expense of the wonder-of-darkness lights on this pagoda. For, as the streams of light, from the cassia branches in the moon, fell upon this lantern-lighted pagoda--this Vitreous-substance-of-liquid-gems-pagoda--and as we saw the pagoda lights that illumine the thirty-three heavens, that detect the good and evil among men, that ward off human miseries, we quickened our steps hither, and lo, in this Temple-of-Gratitude pagoda, here we find you! We find you at last--our always-cherished, always-beloved sons!"

The father paused, breathless; and the mother said to the boys quietly, "Sons, have you eaten your moon-cakes yet?" 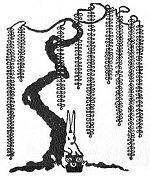 Late in the evening, the moon still shone down upon the city of Chin-ling. The light from the waving branches of the cassia trees in the moon streamed upon the Porcelain Pagoda, while the bells of the tower tinkled in the breeze from the Heaven-High Mountains. The moonlight shone, also, on the silent avenue, bordered with statues, outside the T'ai'ping Gate. It shone on the wall that meandered for miles around Chin-ling, and on the throngs of people strolling homeward through the Red Bird Gate; and it shone on the home of Wing Ling (Peaceful Forest) and Li Sun (Pear-tree, Son of Li).

As the boys were going to bed, the little jade hare looked down at the glistening earth. Li Sun, looking up at the moon, said to his brother, "Wing Ling, I can see the white-jade hare tonight--I see him pounding the moon-drugs!"

If you use Facebook or Google+ & enjoyed The Moon That Shone On The Porcelain Pagoda, please tell your friends and let us know to find more like it for you!