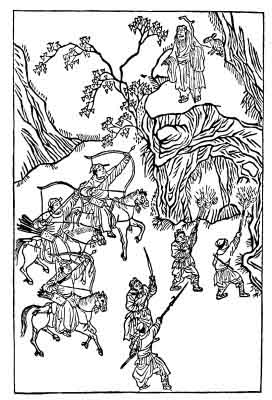 In the county of Hsiang-Tan in Hu-Kuang there was an old and much respected gentleman. He had three sons who did not care for culture and refinement but spent every day in sports and roaming through the mountains.

One day the three went out hunting with a large company of young people and they met unexpectedly an old man in white garments who knelt and thus addressed them: "To refrain from injuring all growing things and from killing whatever is awakening into life is the part of universal lovingkindness as observed by saints and sages. It is now springtime when everything in nature is starting to life again. If you pay no attention to the tenderness of heart as practiced by holy men., and by unchecking the wild passions lurking in men's hearts, if you set the woods afire and exterminate the animals and insects that inhabit them, you will surely incur heavenly displeasure and suffer the consequences thereof. I, poor old creature, have seven young children in my family, and there is not time to remove them to a place of safety; but if you, gentlemen, have pity on us, we will never forget your mercy and will reward you later."

The three leaders of the party did not exactly understand what the old man wanted but without further thought promised to do as he had requested.

When the old man was gone some of the party began to wonder who he could have been and whence he might have come into this wilderness; and they argued that his appeal to their sympathy did not sound human. Possibly he was the spirit of some old wild animal living around in the mountains.

Upon this suggestion they pursued him, and seeing him enter a cave, spread a net before it and started a fire in the entrance. Suddenly a white stag darted forth from the hole, and breaking through the besiegers, climbed up to a near rock, and then assuming the form of an old man, turned back to the hunting party, exclaiming: "You have killed my seven young daughters. You shall have to pay a penalty for this heartless act. A calamity ten times greater than I have suffered, will befall your family."

The three young men tried to shoot him, but he caught up the arrows in his hands and breaking them to pieces disappeared.

Later, there came to their house a Taoist monk who predicted for them an imperial career and great prosperity for the future. Incited by this prophecy, they organized a rebellion in which many of their friends joined, for the purpose of overthrowing the reigning dynasty and establishing a new government under their own leadership. While the preparations were going on secretly, somebody betrayed their conspiracy to the authorities. Soldiers were immediately dispatched to their home, and, surrounding the house, put every one of the family under arrest. On examination they were found guilty of treason. Seventy members of their families and associates were executed according to law; but nobody ever knew what became of the Taoist monk who had been the real leader of the scheme. He as well as the man who had betrayed them disappeared.

If you use Facebook or Google+ & enjoyed The Cruel Hunters, please tell your friends and let us know to find more like it for you!