Och, I thought all the world, far and near, had heerd o' King O'Toole--well, well, but the darkness of mankind is untellable! Well, sir, you must know, as you didn't bear it afore, that there was a king, called King O'Toole who was a fine old king in the old ancient times, long ago; and it was he that owned the churches in the early days. The king, you see, was the right sort; he was the real boy, and loved sport as he loved his life, and hunting in particular; and from the rising o' the sun, up he got, and away he went over the mountains after the deer; and fine times they were. 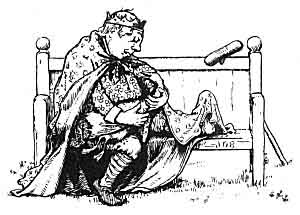 Well, it was all mighty good, as long as the king had his health; but, you see, in course of time the king grew old, by raison he was stiff in his limbs, and when he got stricken in years, his heart failed him, and he was lost entirely for want o' diversion, because he couldn't go a-hunting no longer; and, by dad, the poor king was obliged at last to get a goose to divert him. Oh, you may laugh, if you like, but it's truth I'm telling you; and the way the goose diverted him was this-a-way: You see, the goose used to swim across the lake, and go diving for trout, and catch fish on a Friday for the king, and flew every other day round about the lake, diverting the poor king. All went on mighty well until, by dad, the goose got stricken in years like her master, and couldn't divert him no longer, and then it was that the poor king was lost entirely. The king was walkin' one mornin' by the edge of the lake, lamentin' his cruel fate, and thinking of drowning himself; that could get no diversion in life, when all of a sudden, turning round the corner, who should he meet but a mighty decent young man coming up to him.

"God save you," says the king to the young man.

"God save you kindly, King O'Toole," says the young man,

"True for you," says the king. "I am King O'TooIe," says he, "prince and plennypennytinchery of these parts," says he; "but how came ye to know that?" says he.

You see it was Saint Kavin, sure enough--the saint himself in disguise, and nobody else. "Oh, never mind," says he, "I know more than that. May I make bold to ask how is your goose, King O'Toole?" says he.

"Blur-an-agers, how came ye to know about my goose?" says the king.

"Oh, no matter; I was given to understand it," says Saint Kavin.

After some more talk the king says, "What are you?"

"Well, honest man," says the king, "and how is it you make your money so aisy?"

"Is it a tinker you are?" says the king.

My dear, at the word of making his goose as good as new, you'd think the poor old king's eyes were ready to jump out of his head. With that the king whistled, and down came the poor goose, just like a hound, waddling up to the poor cripple, her master, and as like him as two peas. The minute the saint clapt his eyes on the goose, "I'll do the job for you," says he, "King O'Toole."

"By Jaminee!" says King O'Toole, "if you do, I'll say you're the cleverest fellow in the seven parishes."

"I'll give you whatever you ask," says the king; "isn't that fair?"

"Divil a fairer," says the saint; "that's the way to do business. Now," says he, "this is the bargain I'll make with you, King O'Toole: will you gi' me all the ground the goose flies over, the first offer, after I make her as good as new?"

"Honour bright!" says St. Kavin, back agin, "it's a bargain. Come here!" says he to the poor old goose-come here, you unfortunate ould cripple, and it's I that'll make you the sporting bird." With that, my dear, he took up the goose by the two wings--"Criss o' my cross an you, says he, markin' her to grace with the blessed sign at the same minute-and throwing her up in the air, "whew," says he, jist givin' her a blast to help her; and with that, my jewel, she took to her heels, flyin' like one o' the eagles themselves, and cutting as many capers as a swallow before a shower of rain.

Well, my dear, it was a beautiful sight to see the king standing with his mouth open, looking at his poor old goose flying as light as a lark, and better than ever she was: and when she lit at his feet, patted her on the head, and "Ma vourneen," says he, "but you are the darlint o' the world."

"And what do you say to me," says Saint Kavin, "for making her the like?" 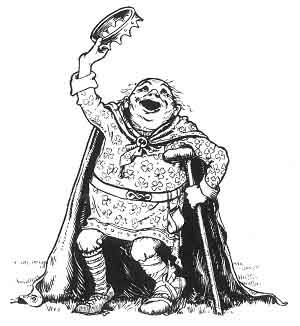 "By Jabers," says the king, "I say nothing beats the art o' man, barring the bees."

"And do you say no more nor that?" says Saint Kavin.

"And that I'm beholden to you," says the king.

"But will you gi'e me all the ground the goose flew over?" says Saint Kavin.

"But you'll keep your word true?" says the saint. "As true as the sun," says the king.

"It's well for you, King O'Toole, that you said that word," says he; "for if you didn't say that word, the devil the bit o' your goose would ever fly agin."

When the king was as good as his word, Saint Kavin was pleased with him, and then it was that he made himself known to the king. "And," says he, "King O'Toole, you're a decent man, for I only came here to try you. You don't know me," says he, "because I'm disguised."

"Oh, queen of heaven!" says the king, making the sign of the cross between his eyes, and falling down on his knees before the saint; "is it the great Saint Kavin," says he, "that I've been discoursing all this time without knowing it," says he, "all as one as if he was a lump of a gossoon?--and so you're a saint?" says the king.

"By Jabers, I thought I was only talking to a dacent boy," says the king.

"Well, you know the difference now," says the saint. "I'm Saint Kavin," says he, "the greatest of all the saints."

And so the king had his goose as good as new, to divert him as long as he lived: and the saint supported him after he came into his property, as I told you, until the day of his death--and that was soon after; for the poor goose thought he was catching a trout one Friday; but, my jewel, it was a mistake he made--and instead of a trout, it was a thieving horse-eel; and instead of the goose killing a trout for the king's supper--by dad, the eel killed the king's goose--and small blame to him; but he didn't ate her, because he darn't ate what Saint Kavin had laid his blessed hands on.

If you use Facebook or Google+ & enjoyed King O'Toole And His Goose, please tell your friends and let us know to find more like it for you!