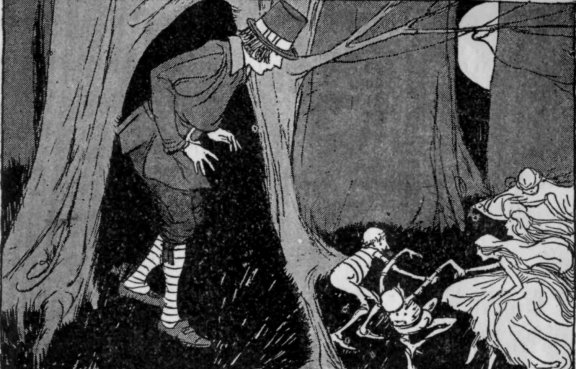 There was once in old Ireland a very fine lad by the name of Donal. He was not only a very fine lad, but a very gay lad. He would go for miles to a party or a wedding; and he was always welcome, for Donal knew where to wear his smile. He wore it on his face instead of keeping it in his pocket.

The dearest wish of Donal's heart no one knew but himself. His soul was full of music, and he longed to have a violin.

One night Donal was going home through a dark forest when a storm came up. He found an old hollow tree and got inside of it to keep dry. Soon he fell asleep.

After a while Donal was awakened by a strange noise. He peeped out, and he saw a queer sight. The storm had passed, and the moon was shining. Many elves were dancing to strange music played by an old, old elf.

Such queer dancing it was! Donal crept out of the tree and drew nearer and nearer. Suddenly he laughed out loud and said, "Well, that's the worst dancing I have ever seen!"

The fairies were astonished and angry, and they all began to talk at the same time.

"Cut his head off!" cried a third.

But the queen stepped out among them and said, "Leave him to me."

Then she called Donal to her. Now Donal was a wee bit frightened, but he knew where to wear his smile, you remember. So he went up to the queen, smiling and bowing.

"You say our dancing is the worst you have ever seen," she said. "Now, show us that you can do better."

Donal smiled again and bowed low. Then he began to dance. Such dancing the elves had never seen! They clapped their hands and made him dance again and again. Finally, Donal was exhausted, and after making a low bow to the queen, sat down on the ground.

The fairies crowded around him.

"Give him our silver!" cried one.

"Make it gold!" cried another.

She went up to the old, old elf who had been playing for the dance. Taking his violin from him, she gave it to Donal. You see, the queen knew the dearest wish of his heart.

Then Donal was a happy lad, indeed! He thanked the queen and went home playing on his new violin.

There lived near Donal's home a lad named Conal. He was not such a fine lad as Donal, nor such a gay one. He was a greedy lad, and the dearest wish of his heart was to be rich. And he did not know where to wear his smile. If he had one, he kept it in his pocket.

When Conal heard what had happened to Donal, he wished to know all about it. So he went to him and said, "Donal, man, how did you get that beautiful violin?"

Donal told the story backward and forward, and forward and backward, from beginning to end, until Conal knew it by heart.

Then Conal said to himself, "I will go to the hollow tree and dance for the elves; but I shall not be so foolish as Donal. I will take their gold and silver, and their diamonds, too."

That night Conal went to the hollow tree and waited until the elves appeared. Then he crept out and watched them dance. And he said, just as Donal had, "Well, that's the worst dancing I have ever seen!"

The fairies were astonished and angry again, and again they all began to talk at once.

"Another man among us!" cried one.

"Cut off his head!" cried a third.

Then she called Conal to her. Now Conal did not know where to wear his smile, you remember; he always kept it in his pocket. So he went up to the queen with a very sour face.

The queen said to him, as she had to Donal, "You say our dancing is the worst you have ever seen. Now, show us that you can do better."

Conal began to dance, and he could dance well. The elves were delighted. They clapped their hands and asked him to dance again, but he said roughly, "No, that is enough. Do you expect me to dance all night?"

The elves were silent then, and the queen's face was stern. But she was a just queen, and she said, "You have danced well. Will you have some of our silver?"

"Yes," said Conal, without a word of thanks; and he filled his coat pockets.

"Will you have gold?" asked the queen.

"Yes," said Conal greedily, as he filled the pockets in his trousers.

"Will you have some of our diamonds?" the queen asked, and her face was dark with anger.

"You shall not have them, you greedy lad!" cried the queen; "you shall have nothing."

Just then a cloud passed across the moon, and the elves vanished.

He plunged his hands into his pockets and lo! the gold and silver had turned to stones. Then Conal went home a sadder and a wiser lad.

If you use Facebook or Google+ & enjoyed Donal and Conal, please tell your friends and let us know to find more like it for you!