Once upon a time there was a man who was very poor. He was so poor that he had to sell one thing after another to get food to keep from starving. After a while there was nothing left except the cat. He was very fond of his cat, and he said, "O, Cat, let come what will, I'll never part with you. I would rather starve."

The cat replied, "O good master Domingo, rest in peace. You will never starve as long as you have me. I am going out into the world to make a fortune for us both."

The cat went out into the jungle and dug and dug. Every time he dug he turned up silver pieces. The cat took a number of these home to his master so that he could purchase food. The rest of the pieces of silver the cat carried to the king. 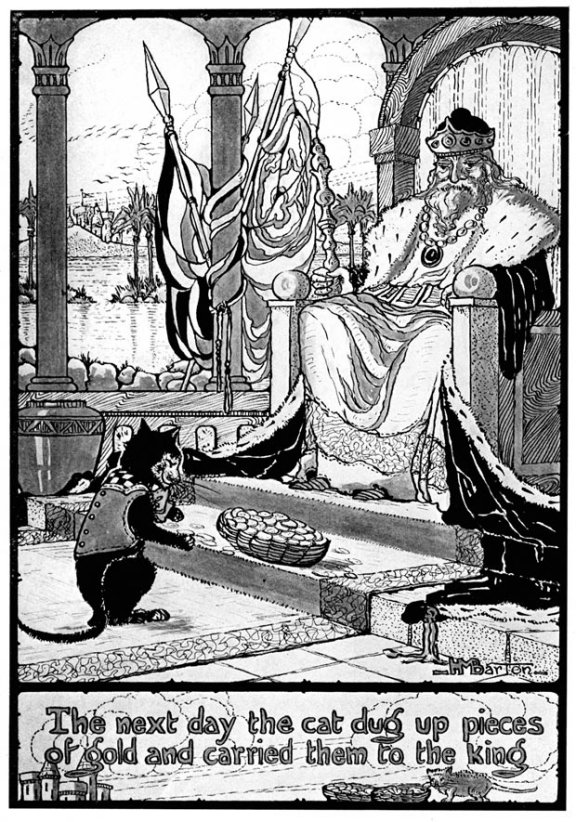 "Where do you get these rich gifts? Who is sending me such wonderful presents?" asked the king.

The cat replied, "It is my master, Domingo."

Now the king had a beautiful daughter. He thought that this man Domingo must be the richest man in the whole kingdom. He decided that his daughter should marry him at once. He made arrangements for the wedding through the cat.

"I haven't any clothes to wear at the wedding," said Domingo when the cat told him that he was to marry the daughter of the king.

"Never mind about that. Just leave it to me," replied the cat.

The cat went to the king and said, "O King, there has been a terrible fire in the tailor shop where they were making the wedding garments of my master, Domingo. The tailor and all of his assistants were burned to death, and the entire outfit of my master Domingo was destroyed. Hasn't your majesty something which you could lend him to wear at the wedding?" The king sent the richest garments which his wardrobe afforded. Domingo was clothed in state ready for the wedding.

"I have no palace to which to take my bride," said Domingo to the cat.

"Never mind. I'll see about it at once," replied the cat.

The cat went into the forest to the great castle where the giant dwelt. He marched straight up to the big giant and said, "O Giant, I wish to borrow your castle for my master Domingo. Will you not be so kind as to lend it to me a little while?"

The giant was very much insulted. "No, indeed, I'll not lend my castle to you or your master Domingo or anybody else," he shouted in his most terrible voice.

"Very well, then," replied the cat. He changed the giant to a piece of bacon in the twinkling of an eye and devoured him on the spot.

As Domingo and his bride sailed down the river to the garden gate in the royal barge, they saw the cat sitting in the window singing. After that they never saw him again. He disappeared in the jungle and went to make some other poor man rich. Perhaps he will come your way some day. Who knows? "Quem sabe?" they say in Brazil.

If you use Facebook or Google+ & enjoyed Domingo's Cat, please tell your friends and let us know to find more like it for you!