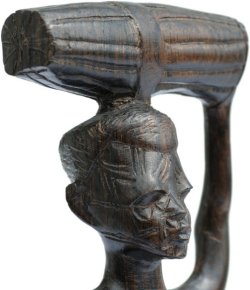 Two brothers lived in a certain town. They were called Buite and Swarmi.

Swarmi was married and had servants to wait upon him; but Buite was alone and despised. As Buite had no one to cook for him, he used to eat palm-kernels, which he daily brought in from the bush.

Swarmi treated Buite very badly, never asking him to join him at his meals, or enter in any way into the festivities of his family; so that Buite determined to leave his town, and live alone far away in the bush. So one day, without saying anything, he left his brother, and walked, and walked, and walked, until at nightfall he arrived at a deep valley, fertile and thickly planted with palm-trees. Far away at the bottom of this damp valley, beneath the shade of the high trees, palms and rushes, Buite built himself a little shed-a roof, supported upon sticks, about a foot in height above the ground. In this damp hovel he spread out his mat to sleep upon, and lighted his fire to cook his solitary meals.

Tired and weary of life, Buite one night fell asleep, and dreamt that a beautiful girl called him, that he rose and followed her, and that she led him through the thick jungle and woods, until they arrived at a river. Here she told him to tap on the ground three times; and to his surprise a canoe appeared. He tapped the canoe three times, and paddles made their appearance. Then she told him to go and fish, and bring her food, that she might cook it for him; but that he should cut the heads off the fish, as she could not bear to see them. And he dreamt that he did so, and returned to find the girl waiting for him to cook the fish. Then he awoke, and could sleep no longer that night.

The next morning he got up and, remembering his dream, travelled through the jungle and woods, until he came to the river he had seen in his dream. And he tapped the ground, and lo! there appeared the canoe. He tapped the canoe, and there were the paddles. Then he went and fished, and cut the heads off the fish, and returned to his wretched hovel. But the shed had disappeared, and in its place was a large house, beautifully furnished, and all the necessary out-houses, and above everything, the beautiful girl, who came forward to meet him, just as if she had been accustomed to do so every day, and she also had nine little servants to wait upon her. And when she told him, that she had come to comfort him, he was very pleased and loved her very much.

And every day, when he went out fishing, she would send one of the little ones with him, to carry the fish. And people who passed that way were astonished at the liberal treatment bestowed upon them by Buite, and wondered where he had got his wife and riches from. His brother, Swarmi, would not believe in Buite's prosperity, and determined to visit him.

Now Buite each day went fishing, taking one of his wife's boys with him. But after a time he got tired of always cutting off the fishes' heads.

And it so happened one day that he did not cut off the heads of the fish. When the boy saw this, he cried out and protested saying that his mother did not like to see a fish's head.

But Buite asked him if it was for him, a servant, to talk in that way to his master. And the boy left for the house, carrying the fish with him. But after a time Buite ran after the boy, and caught him up just before he got home, and cut the heads of the fish off, so that his wife should not see them.

And this happened eight times with eight different servants of his wife. Each time the boy protested; each time Buite scolded him, and then, repenting, ran after the boy and cut the heads of the fish off.

The ninth time he took the youngest boy, Parrot by name, and fished, and gave the entire fish to him to carry home. And Parrot cried very much and protested, but was frightened by Buite's imperious manner, and ran away home with the fish. And Buite ran after him, and ran, and ran, and ran, but could not catch Parrot up.

And Parrot arrived, and showed the fish to the woman; and immediately the house vanished; and the out-houses, and the servants, and beautiful furniture, and lastly the lovely wife, all disappeared, so that when Buite arrived, all out of breath, he no longer saw his house, or wife, or servants, but only his brother, Swarmi, who just then turned up to visit him.

And Buite was very sorry, and wept very much; and Swarmi more than ever despised him, and left him once more alone.

If you use Facebook or Google+ & enjoyed The Vanishing Wife, please tell your friends and let us know to find more like it for you!