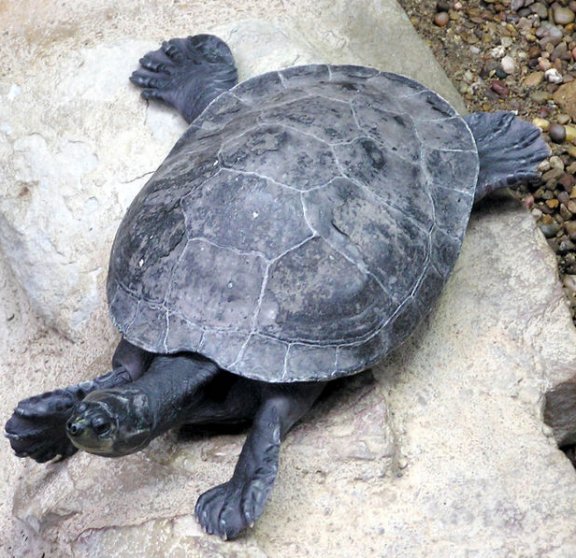 A turtle and a man built themselves a small town, but because they had as yet planted nothing they suffered from hunger.

"Let us build a large trap," said the turtle, "that we may catch an antelope." The man agreed, and they set to work and made a very large one.

"This is too large," said the turtle, "let us divide it, and each have a trap of his own."

The man divided it and the turtle chose the best one. That night the man caught nothing, but a splendid antelope was found in the turtle's trap. As the turtle could not lift it, he called all the people from round about to a dance.

While they were dancing, the chimpacasi, or wild ox, came out of the wood and wanted to know what all this singing was about. And the turtle told him that he had caught an antelope, and as he could not carry it to his house, he had called in his friends. "Perhaps, good ox, you will take the antelope out of the trap for me and lift it as far as my house."

"And now, please go and fetch some water."

The ox went and drew some water. They then cut up the antelope.

And the delighted ox washed them.

"This is your share, dear ox; but you must go and got some leaves to wrap it in."

And while the ox was away in the woods, collecting leaves, the turtle lifted all the meat up and carried it into his house, which was a very strong one, and shut himself inside.

The ox returned and asked for his share, but the turtle refused to let him have it, and insulted him grossly. The ox became very angry, and told the turtle that he would destroy the trap. But the turtle had reset the trap, so that when the ox put his head in he was caught, and died after a short struggle.

"Oh, oh, Mr. Ox, I told you so. You should be more careful when you are entering the turtle's trap."

He called the people again to dance and sing.

This time the leopard was attracted by the noise, and came to the turtle to find out what it was all about. And the turtle told him, and said that his hands were very sore, and that he could not carry the ox to his house; would the leopard drag him there?

Glad to oblige the turtle, the leopard at once offered his services, and in a very short time had brought the ox to the turtle's house.

"Thank you, dear leopard, will you now go to the river and fetch some water, and clean the pots?

And when they had cooked the whole of the ox, the turtle put aside part of the meat for the leopard, and carried the rest into his shimbec.

"You would better go and fetch some leaves to wrap the meat in," said the turtle.

The leopard went. While he was away, the turtle took the meat, and shut himself within his strong house.

The leopard returned and said "Turtle, turtle, where is my meat?"

"It is here, my dear leopard."

"Then I will destroy your trap."

"Take care you do not meet with the fate of the ox."

And the leopard went and destroyed the trap entirely, and then, placing the rope round his neck lay down in the middle of the ruins, as if he had been entrapped.

Then the turtle went again to look at his trap and was delighted to find the leopard there.

And the turtle stretched out his long neck as if to kiss the leopard. The leopard sprang upon him, and bit the turtle's head off before he had time to pull it in. He then entered his shimbec and ate up all the meat that the turtle had stored there.

Now the man wondered what the leopard was doing in the turtle's shimbec. So he went there and asked the leopard And the leopard told him how the turtle had tried to trick him, and how he had killed the turtle. And the man said he was quite right and might go on eating the food of the turtle.

If you use Facebook or Google+ & enjoyed The Turtle And the Man, please tell your friends and let us know to find more like it for you!