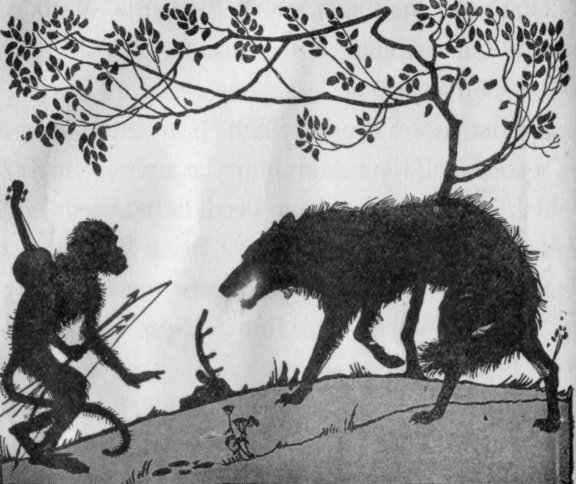 Once upon a time there was a great famine in the land, and Monkey could find no food. There were no bulbs, no beans, no insects, nor anything else to eat.

At last Monkey said to himself, "Why should I perish here with hunger? My uncle Orang-outang has enough and to spare; I shall go to him, and he will give me food and shelter."

So he set out and soon came to the place where Orang-outang lived. For a long time Monkey was happy in his new home, but by and by he heard that there was no longer a famine in his own land. Then he decided to go back.

Before he started, Orang-outang made him a present of a fiddle and a bow and arrow,

"With this bow and arrow you can kill any animal," he said. "With this fiddle you can make anything dance until you bid it stop."

Thanking his uncle for the presents, Monkey set out on his homeward journey. On the way he met Brother Wolf.

When Wolf had told him the news, Monkey asked, "What have you been doing to-day?"

"Oh," said Wolf, "I have been following a deer all the morning, but I have been unable to get near enough to kill him. Now I am faint with hunger."

"I can help you," said Monkey. "I have a magic bow and arrow. Show me the deer, and I will bring him down."

When Wolf showed him the deer, Monkey fitted an arrow to the bow and took aim. Hardly had the arrow left the bow when the deer fell dead.

Monkey and Wolf sat down and had a good feast. As Wolf ate, he thought of the magic bow and arrow, and he planned to get them away from Monkey.

"First I will ask for them," he said to himself. "If Monkey will not give them to me, I will use force."

When Wolf had finished eating, he said to Monkey, "Please give me the bow and arrow."

"I will not," said Monkey. "They were a present from my dear uncle; why should I give them to you?"

"Very well," said Wolf. "I am stronger than you, and I will take them by force."

Wolf was just about to snatch the bow and arrow from Monkey when Jackal came along. Then Wolf thought of a new plan.

He called out to Jackal, "Help! help! Monkey has stolen my magic bow and arrow."

Jackal came running to them. Wolf told his side of the story, and Monkey told his.

"I cannot believe either of you," said Jackal. "Let us lay the question before the court. There Lion, Tiger, and the other animals will hear you both; perhaps they will be able to decide to whom the magic bow and arrow belong. But to keep you two from quarreling, I had better take care of the bow and arrow."

Monkey gave them to Jackal, and all three started off to court. When they arrived, there sat Lion on the throne. Seated around were the other animals of the jungle.

Monkey told his story first. Standing in front of the throne, he made a low bow and said, "The great famine, my lord, drove me out of my country, and I had to take refuge with my uncle. When I started back home, he gave me this bow and arrow. Finding Wolf almost starving, I shot a deer for him. Instead of being grateful for the food, he tried to rob me of the bow and arrow. I am here to ask that you restore them to me."

"He does not tell the truth," cried Wolf.

Then Jackal said, "I believe that the bow and arrow belong to Wolf; he and Monkey were quarreling about them when I came along. They agreed to leave the question to you, King Lion. I know you will see that justice is done."

King Lion rose and asked, "What say you? To whom do the bow and arrow belong?"

"Stealing is a crime that must be punished," said King Lion. "What shall be done?"

"Let Monkey be hanged," they all cried.

Monkey still had his magic fiddle. Holding it in his hand, he made a deep bow and said: "Give me leave to play a tune on my fiddle before I hang, O King."

Now, the beasts all loved a merry tune, and knowing that Monkey was a master player they called out, "Let him play."

Monkey placed the fiddle under his chin, drew the bow across the strings, and struck up "Cockcrow." This was a favorite tune with the court. At the first notes all nodded their heads in time to the music. As Monkey played on, the entire court began to dance.

Round and round they went like a whirlwind. Over and over, quicker and quicker sounded the tune of "Cockcrow." Faster and faster flew the dancers, until one after another fell to the ground worn out.

Monkey saw nothing of all this. With eyes closed and his head placed lovingly against the fiddle, he played on and on, keeping time with his foot.

Wolf was the first one to cry out, "Please stop, Cousin Monkey. For pity's sake, stop."

But Monkey did not seem to hear him. Again and again sounded the magic notes of "Cockcrow."

King Lion had gone round and round with his young wife so many times that both were ready to drop. At last, as he passed Monkey, he roared, "Stop, ape! My whole kingdom is yours if you will only stop playing."

"I do not want it," said Monkey. "Make Wolf confess that he tried to steal my bow and arrow. Then I will stop playing."

"I confess! I confess!" panted Wolf, who was ready to fall to the ground.

"Good," cried King Lion, as the music stopped. "Monkey is innocent. Let him have his bow and arrow."

So Wolf was soundly beaten and driven from the court. Then Monkey went off rejoicing, carrying with him his magic gifts.

If you use Facebook or Google+ & enjoyed The Monkey's Fiddle, please tell your friends and let us know to find more like it for you!