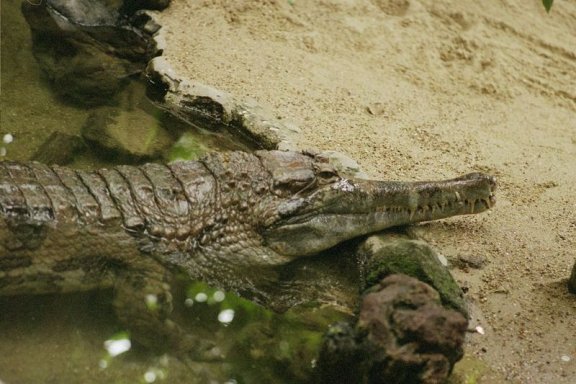 Once a man and his many wives lived in a certain town far away in the bush. His wives refused to work, and he was at his wit's ends to know what to do to feed them and himself.

One day a happy thought struck him, and away he went into the bush to cut palm-kernels. He cut twenty bunches in all. Then he sought out the leopard, and made him his friend by presenting him with ten bunches of palm-nuts. The leopard thanked him very much, and told him that if he would cut palm-nuts for him, and him only, he would never more be without fresh meat to feed his wives. The man thanked the leopard, and promised to supply his wants.

Then the man went to the crocodile and presented him with ten bunches of palm-nuts. The crocodile was indeed thankful, and promised to supply the man daily with a quantity of fish, if he would only promise in his turn to cut palm-nuts for him and no other.

The next day, the leopard came to the man's town and presented him with a wild pig. The crocodile came soon afterwards and brought him plenty of fish. Thus the town was full of food, and the man and his wives were never hungry.

This continued for a long time, until, in fact, the crocodile and leopard were getting tired of palm-nuts, and asked the man to present them with a dog, as they had heard that dog's flesh was excellent. Hitherto neither the crocodile nor the leopard had met each other, nor had they ever seen a dog. The man did not wish to lose his dogs, so he told them that he had none. But they each day became more anxious to eat dog's flesh, and so they worried the man, until at last he promised them a dog each. But he did not mean to give them the dogs. However, they bothered and vexed him so much that they became a nuisance to him, and he determined to rid himself of them.

The next day, the leopard came and asked for a dog, which as yet he had neither seen nor tasted. The man told him that if he went to such and such a place he would there find a dog just to his taste. The leopard left him to find the dog.

The crocodile also came, bringing plenty of fish, and again asked for a dog. The man told him to go to the same place he had indicated to the leopard, and told him that he would there meet a dog that he would enjoy immensely.

The crocodile arrived at the spot first, but saw nothing that he could imagine a dog. So relying upon the word of the man he closed his eyes and basked in the hot sun. After a time the leopard came along and found the crocodile, as he thought, asleep.

"This is indeed a much larger animal than I had imagined the dog to be," he murmured.

The crocodile, aroused by the rustling noise made by the leopard as he approached, slowly opened his eyes, and thought the leopard was a very large kind of dog, if all he had heard about dogs was true. Hardly had he moved, when the leopard sprang upon him. Then there was a terrible fight, and the man called all the town to witness it. After a prolonged struggle the beasts killed each other, and the man and his people returned to town and feasted upon the food the crocodile and leopard had given him, and sang and danced until the next day.

If you use Facebook or Google+ & enjoyed The Leopard And The Crocodile, please tell your friends and let us know to find more like it for you!