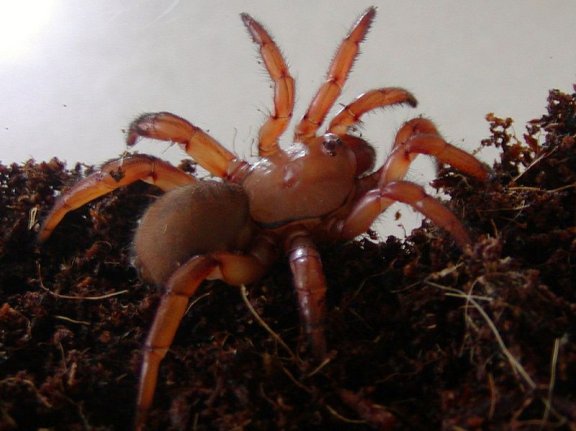 Nzambi on earth had a beautiful daughter; but she swore that no earthly being should marry her, who could not bring her the heavenly fire from Nzambi Mpungu, who dwelt in the heavens above the blue roof. And as the daughter was very fair to look upon, the people marvelled, saying: "How shall we secure this treasure? and who on such a condition will ever marry her?"

Then the spider said: "I will, if you will help me."

And they all answered: "We will gladly help you, if you will reward us."

Then the spider reached the blue roof of heaven, and dropped down again to the earth, leaving a strong silken thread firmly hanging from the roof to the earth below. Now, he called the tortoise, the woodpecker, the rat, and the sandfly, and bade them climb up the thread to the roof. And they did so. Then the woodpecker pecked a hole through the roof, and they all entered the realm of the badly dressed Nzambi Mpungu.

Nzambi Mpungu received them courteously, and asked them what they wanted up there.

And they answered him, saying: "O Nzambi Mpungu of the heavens above, great father of all the world, we have come to fetch some of your terrible fire, for Nzambi who rules upon earth."

"Wait here then," said Nzambi Mpungu, "while I go to my people and tell them of the message that you bring."

But the sandfly unseen accompanied Nzambi Mpungu and heard all that was said. And while he was gone, the others wondered if it were possible for one who went about so poorly clad to be so powerful.

Then Nzambi Mpungu returned to them, and said: "My friend, how can I know that you have really come from the ruler of the earth, and that you are not impostors?"

"Nay," they said; "put us to some test that we may prove our sincerity to you."

"I will," said Nzambi Mpungu. "Go down to this earth of yours, and bring me a bundle of bamboos, that I may make myself a shed."

And the tortoise went down, leaving the others where they were, and soon returned with the bamboos.

Then Nzambi Mpungu said to the rat: "Get thee beneath this bundle of bamboos, and I will set fire to it. Then if then escape I shall surely know that Nzambi sent you."

And the rat did as he was bidden. And Nzambi Mpurigu set fire to the bamboos, and lo! when they were entirely consumed, the rat came from amidst the ashes unharmed.

Then he said: "You are indeed what you represent yourselves to be. I will go and consult my people again."

Then they sent the sandfly after him, bidding him to keep well out of sight, to hear all that was said, and if possible to find out where the lightning was kept. The midge returned and related all that he had heard and seen.

Then Nzambi Mpungu returned to them, and said: "Yes, I will give you the fire you ask for, if you can tell me where it is kept."

And the spider said: "Give me then, O Nzambi Mpungu, one of the five cases that you keep in the fowl-house."

"Truly you have answered me correctly, O spider! Take therefore this case, and give it to your Nzambi."

And the tortoise carried it down to the earth; and the spider presented the fire from heaven to Nzambi; and Nzambi gave the spider her beautiful daughter in marriage.

But the woodpecker grumbled, and said: "Surely the woman is mine; for it was I who pecked the hole through the roof, without which the others never could have entered the kingdom of the Nzambi Mpungu above."

"Yes," said the rat, "but see how I risked my life among the burning bamboos; the girl, I think, should be mine."

"Nay, O Nzambi; the girl should certainly be mine; for without my help the others would never have found oat where the fire was kept," said the sandfly.

Then Nzambi said: "Nay, the spider undertook to bring me the fire; and he has brought it. The girl by rights is his; but as you others will make her life miserable if I allow her to live with the spider, and I cannot give her to you all, I will give her to none, but will give you each her market value."

Nzambi then paid each of them fifty longs of cloth and one case of gin; and her daughter remained a maiden and waited upon her mother for the rest of her days.

If you use Facebook or Google+ & enjoyed How The Spider Won And Lost Nzambi's Daughter, please tell your friends and let us know to find more like it for you!