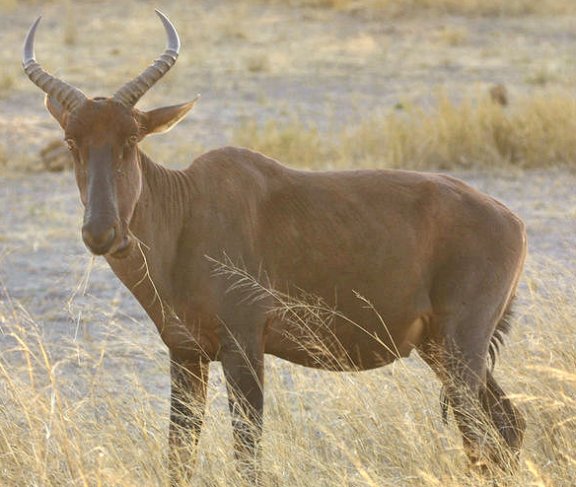 Nenpetro had two Wives, and they each gave birth to a beautiful daughter. As they were a rich family, they determined not to take a present for their daughters on being asked in marriage, but to give them to him who could find out their names. They called one Lunga and the other Lenga.

The daughters grew up as beautiful as their parents could have wished, and were now of a marriageable age. The antelope then came to the parents, and, placing his large bundle of cloth and valuables at their feet, asked them to give him their daughters in marriage.

"We cannot accept your generous presents, for we have sworn to give our daughters only to the man who can guess their names."

The antelope scampered off and wondered how he could possibly find out their names.

Then Nsassi, a well-known prince of a town some way off, came along followed by his faithful dog, and asked Nenpetro for his daughters.

"Nay, guess their names, my son, and thou shalt have them."

"Well! what do you call them?"

And the dog sat watching his master and heard all that was said, and felt for him. Nsassi went away sore-hearted; for the daughters of Nenpetro were beautiful to behold, and he yearned for them. So grieved was he, that he did not miss his dog, but marched straight back to his town to devise some means by which he might find out their names.

And now Nenpetro called his daughters to him by their names, "Lunga! Lenga! come here."

And the dog heard their names and said: "Oh I must run off and tell my father the names of these beautiful daughters, that he may marry them and be happy."

And off he trotted along the road, until he was nearly dead with hunger. Then he looked about for something to eat, and after some trouble caught a wild kitten. When he had eaten it, he set off again full of happiness, until he began to think over in his mind the names of Nenpetro's daughters. Alas! he had forgotten them. What -was he to do? He resolved to go back again to Nenpetro's town. After a weary journey, he arrived there about midnight, and then slept until well into the next day.

"Oh! Lunga and Lenga, give that little dog of Nsassi's some food."

The daughters gave him food, but no water to drink; but he licked their hands and thanked them. Off he set again as happy as possible, fall of the importance of his mission. He met a clear stream of water, and so overcome was he by thirst, that he forgot his errand and drank deeply of the waters. When he had satisfied himself, he tried to think of the names of Nenpetro's daughters, but he could not. So he had to return again to Nenpetro's town and sleep there that night.

The next morning Nenpetro called Lunga and Lenga, and said: "My children, give food and drink to Nsassi's dog."

And the daughters gave him both food and drink. And he was satisfied, and once more set off towards Nsassi's town. He arrived there safely this time, having thought of nothingthern but the names of Nenpetro's daughters and his father's happiness along the road.

And Nsassi, when he saw him, was glad, and called him, and said: "O, my dear dog, where hast thou been? and canst thou tell me the names of Nenpetro's daughters?

And the dog answered: "Yes, my master, I know their names."

"First, thou must pay me, father."

Nsassi killed a pig and gave it to his dog. Then the dog told him the names of the beautiful girls, and all that had happened. And Nsassi was delighted, and gave a great dance; and all in town were happy, as now it was certain that Nsassi would get the daughters of Nenpetro in marriage.

Then Nsassi and his dog set out to claim the daughters of Nenpetro. But the dancing and singing had made them very thirsty, so that when they came to the clear water they drank deeply. And when they were satisfied they found to their dismay that they had forgotten the names of the girls.

Then the dog went alone to Nenpetro's town, and again heard the father call his daughters by their names. They gave him food and drink, and he immediately returned to his master. Then they neither ate nor drank on the road, but went straight for Nenpetro's town. And Nsassi called the daughters of Nenpetro by their names and claimed them as his wives.

And Nenpetro said, "Take thern, my son, for thou hast fulfilled the condition upon which I promised them."

And the antelope declared war against Nsassi, and they fought; but Nsassi gained the victory, and killed the antelope and ate him.

If you use Facebook or Google+ & enjoyed How Nsassi Got Married, please tell your friends and let us know to find more like it for you!