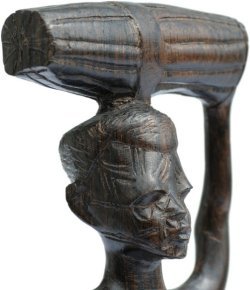 There were two sons of one mother, one named Mavungu, and the other Luemba. Luemba was a fine child, and grew up to be a handsome man. Mavungu was puny and miserable-looking, and as he came to man's estate became dwarfish and mean-looking. The mother always treated Luemba very well: but she maltreated Mavungu, and made him sleep outside the house beneath the mango-trees; and often when he approached her, to beg for food, she would throw the water she had cooked the beans in over his head.

Mavungu could not stand this bad treatment any longer; so he ran away into the woods, and wandered far away from home, until he came to a river. Here he discovered a canoe, and so determined to use it as a means of carrying him still further from his town. And he paddled and paddled, until he came to a huge tree, that overspread the river and prevented him from paddling. So he laid his paddle down, and caught hold of the leaves of the fuba-tree to pull his canoe along. But no sooner had he begun to pull the leaves of the fuba-tree, than he heard a voice, as if of a woman, faintly crying: "You are hurting me! please take care."

Mavuiio, wondered, but still pulled himself along.

"Take care! you are breaking my legs off," said the voice.

Still Mavungu pulled until a leaf broke off and instantly became changed into a beautiful woman. This startled Mavungu, so that he pulled many other leaves off the fuba-tree. Each leaf turned into a man, or a woman; his canoe was so full that he could not pull it any longer.

Then the first woman told him that she had come to be his wife, and comfort him; and Mavungu was no longer afraid, but was very happy. Then the wife appealed to her fetish, and said: "Am I to marry a man so deformed as this one is?" And immediately Mavungu became changed into a beautifully-formed man.

"Is he to be dressed like that?" she cried; and straightway his dress was changed.

In the same magical way did the wife build Mavungu a large house and town for his people, so that he wanted nothing that was needful to a powerful prince. And as people passed that way they were astonished at the transformation, and wondered where Mavungu had obtained his beautiful wife. And his mother and brother and whole family came to see him; and he treated them liberally and sent them away loaded with presents. But, having been expressly warned by his wife to say nothing to them as to the origin of his happiness, he left them in ignorance of that fact.

Then his people invited Mavungu to their town, but his wife advised him not to go, and so he stayed at home. But after having received many invitations he finally agreed, in spite of his wife's advice, to visit them. He promised, however, not to eat any of the food given to him. When he arrived in town his mother placed poisoned food before him and urged him to partake thereof, but he refused. And then they asked. about his beautiful wife, and being taken off his guard, he replied:

"Oh, when I left you I wandered through the woods."

But when he had got thus far he heard his wife's voice ringing through the woods:

"Oh! Ma-vu-ng-u-a-a-a! " and immediately he remembered, and got up and ran away home.

His wife was very cross with him, and told him plainly that she would not help him the next time he made a fool of himself.

Some time after this Mavungu again went to visit his family. His wife said nothing, neither asking him to stay at home, nor giving him her consent to his going. When he had greeted his mother and had partaken of food, the family again asked him to tell them from whence he had obtained his wife.

And he said: "When I left you, owing to your bad treatment, I wandered through the woods and came to a river. Dear me! where has my beautiful hat gone? "

"Your brother has taken it, to put it in the sun," said the mother, " but continue."

"I found a canoe with a paddle in it. Where has my coat gone?"

"Your brother has taken that also."

"And I paddled and paddled. Why have you taken I my beautiful cloth? "

"To have it washed, of course."

"I paddled until I came to a big tree. Nay, why not leave me my shirt? and as I pulled off the leaves of the fuba-tree, they turned into my wife and her attendants. But I am naked!"

Then Mavungu remembered, and ran away to his town, only to find that it and his beautiful wife had disappeared. And when the people heard the whole story, they said it served Mavungu right for being so foolish as to want to please his people, who had been his enemies all along, rather than please his wife, who had been so good to him.

If you use Facebook or Google+ & enjoyed Another Vanishing Wife, please tell your friends and let us know to find more like it for you!