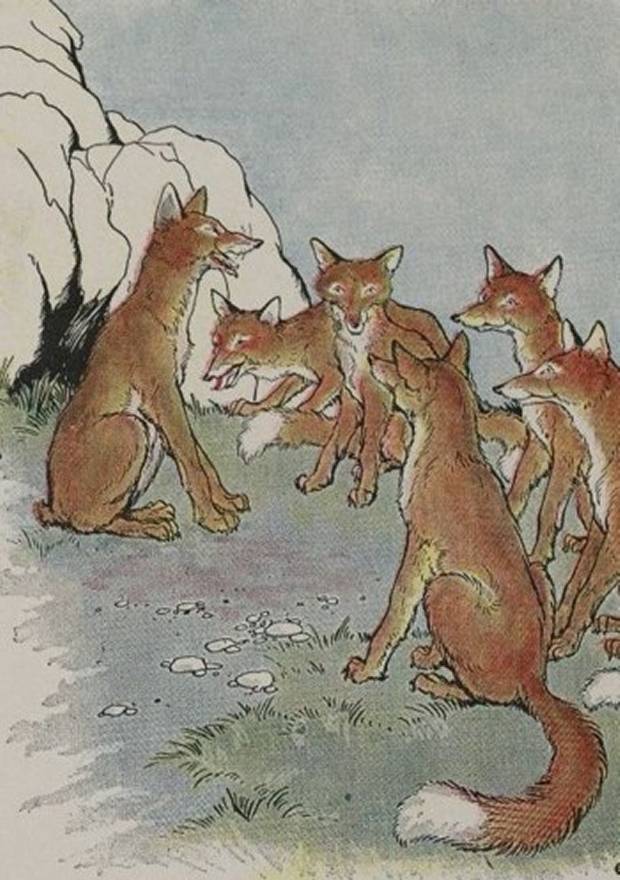 The Fox Without A Tail By Milo Winter

A Fox that had been caught in a trap, succeeded at last, after much painful tugging, in getting away. But he had to leave his beautiful bushy tail behind him.

For a long time he kept away from the other Foxes, for he knew well enough that they would all make fun of him and crack jokes and laugh behind his back. But it was hard for him to live alone, and at last he thought of a plan that would perhaps help him out of his trouble.

He called a meeting of all the Foxes, saying that he had something of great importance to tell the tribe.

When they were all gathered together, the Fox Without a Tail got up and made a long speech about those Foxes who had come to harm because of their tails.

This one had been caught by hounds when his tail had become entangled in the hedge. That one had not been able to run fast enough because of the weight of his brush. Besides, it was well known, he said, that men hunt Foxes simply for their tails, which they cut off as prizes of the hunt. With such proof of the danger and uselessness of having a tail, said Master Fox, he would advise every Fox to cut it off, if he valued life and safety.

When he had finished talking, an old Fox arose, and said, smiling:

"Master Fox, kindly turn around for a moment, and you shall have your answer."

When the poor Fox Without a Tail turned around, there arose such a storm of jeers and hooting, that he saw how useless it was to try any longer to persuade the Foxes to part with their tails.

If you use Facebook or Google+ & enjoyed The Fox Without A Tail, please tell your friends and let us know to find more like it for you!