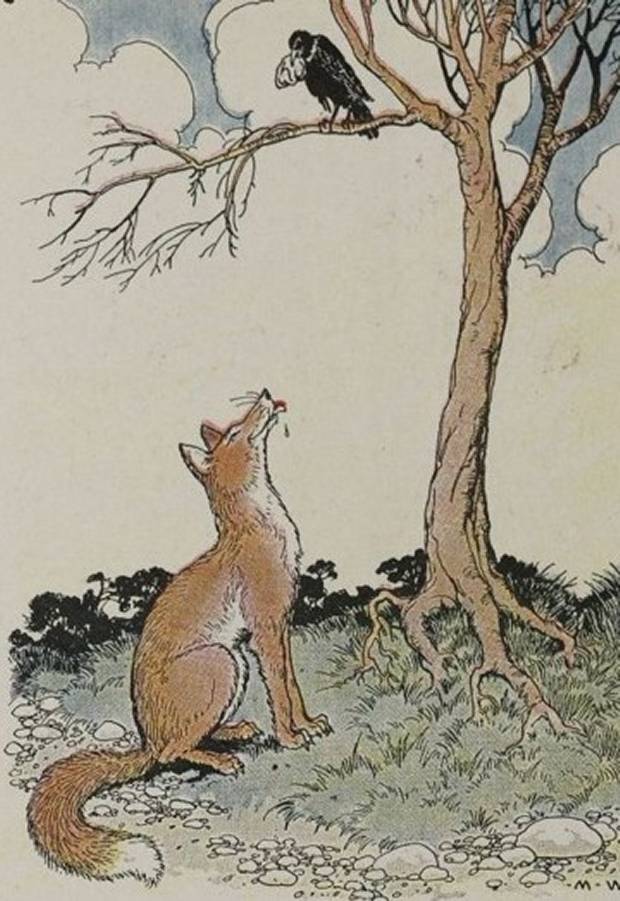 The Fox And The Crow By Milo Winter

One bright morning as the Fox was following his sharp nose through the wood in search of a bite to eat, he saw a Crow on the limb of a tree overhead. This was by no means the first Crow the Fox had ever seen. What caught his attention this time and made him stop for a second look, was that the lucky Crow held a bit of cheese in her beak.

"No need to search any farther," thought sly Master Fox. "Here is a dainty bite for my breakfast."

Up he trotted to the foot of the tree in which the Crow was sitting, and looking up admiringly, he cried, "Good-morning, beautiful creature!"

The Crow, her head cocked on one side, watched the Fox suspiciously. But she kept her beak tightly closed on the cheese and did not return his greeting.

"What a charming creature she is!" said the Fox. "How her feathers shine! What a beautiful form and what splendid wings! Such a wonderful Bird should have a very lovely voice, since everything else about her is so perfect. Could she sing just one song, I know I should hail her Queen of Birds."

Listening to these flattering words, the Crow forgot all her suspicion, and also her breakfast. She wanted very much to be called Queen of Birds.

So she opened her beak wide to utter her loudest caw, and down fell the cheese straight into the Fox's open mouth.

"Thank you," said Master Fox sweetly, as he walked off. "Though it is cracked, you have a voice sure enough. But where are your wits?"

If you use Facebook or Google+ & enjoyed The Fox And The Crow, please tell your friends and let us know to find more like it for you!