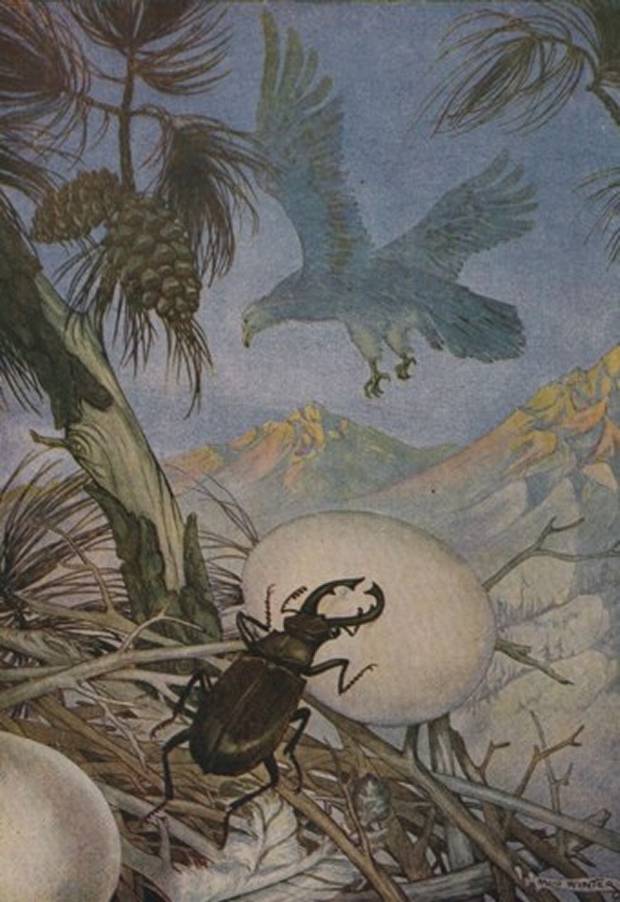 The Eagle And The Beetle By Milo Winter

A Beetle once begged the Eagle to spare a Hare which had run to her for protection. But the Eagle pounced upon her prey, the sweep of her great wings tumbling the Beetle a dozen feet away. Furious at the disrespect shown her, the Beetle flew to the Eagle's nest and rolled out the eggs. Not one did she spare. The Eagle's grief and anger knew no bounds, but who had done the cruel deed she did not know.

Next year the Eagle built her nest far up on a mountain crag; but the Beetle found it and again destroyed the eggs. In despair the Eagle now implored great Jupiter to let her place her eggs in his lap. There none would dare harm them. But the Beetle buzzed about Jupiter's head, and made him rise to drive her away; and the eggs rolled from his lap.

Now the Beetle told the reason for her action, and Jupiter had to acknowledge the justice of her cause. And they say that ever after, while the Eagle's eggs lie in the nest in spring, the Beetle still sleeps in the ground. For so Jupiter commanded.

If you use Facebook or Google+ & enjoyed The Eagle And The Beetle, please tell your friends and let us know to find more like it for you!