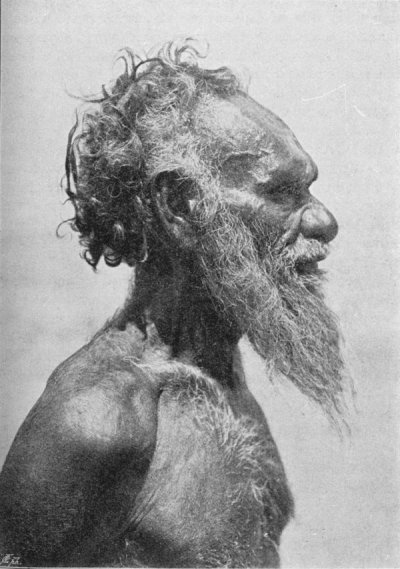 Far to the west in the deep blue sea there dwells a great serpent named Thugine. His scales are of many shimmering colors. When a rainbow appears in the sky, it is Thugine curving his back and the sun reflecting the colors of his scales.

Many years ago, a tribe camped close to a sea beach. One morning they all went out to fish and hunt, with the exception of two boys, whom the old men left in charge of the camp. Wander not into the forest lest the wild dogs eat you, or to the beach, where Thugine the serpent is -waiting for children who wander alone." This was the parting advice of the old men to the boys.

When the men had departed, the boys played about the camp for a while, but they soon grew tired of their games. The day was very hot, and in the distance the boys could hear the dull, deep booming of the surf. Both the boys were longing to go to the beach, but were afraid to speak their desire. At last the elder boy spoke, and said: "The fires of the sun are burning bright to-day, but on the breeze I can feel the cool breath of the sea. Let us go to the beach, and we shall return before the shadow of night has fallen. The men will not know." The other boy hesitated and was afraid, but at last he yielded, and together they wandered hand in hand through the bush.

After walking for some time they came to an opening in the trees, and, before their expectant gaze, a wonderful scene unfolded. A golden beach stretched far away until it was lost to view in the dim distance. The cool waves rolled lazily in great green billows from the outer reef, and dashed in a haze of sparkling white foam on the hot sands of the palm-fringed beach. The song of the sea rose in a deep, loud booming, and gradually died away to a low, soft murmuring. The boys were lost in wonder at the beauty of the scene. Never had they seen such an expanse of water sparkling in the sun like the blue sky. Over its rippled surface the shadows ,of the clouds floated like sails across the sun.

Thugine, the serpent, had seen the boys coming from afar, and, while they played on the beach, he swam swiftly and silently to the shore and seized them. When the men arrived at the camp, they discovered the absence of the boys. They searched the bush all through the -night, and at dawn came to the beach. Far from the shore they saw two, black rocks jutting out of the sea. Then they knew that Thugine had taken the wandering boys and turned them into rocks. The men turned their faces again towards the camp; their hearts were heavy and their thoughts were sad.

To this day the rocks remain between Double Island Point and Inship Point, When a rainbow appears in the sky, the old men of the tribe tell the story of the disobedience and punishment of the wandering boys.

If you use Facebook or Google+ & enjoyed Thugine, The Rainbow And The Wandering Boys, please tell your friends and let us know to find more like it for you!