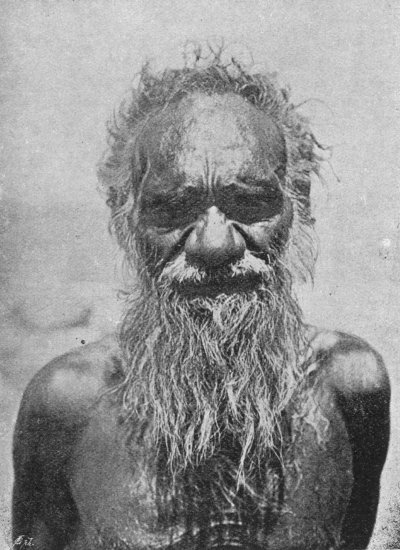 The native bear and the whip-tail kangaroo were very friendly. They shared the same gunyah, and hunted together, and were very proud of their long tails. At this time a drought was over the land. Water was very scarce, and the two friends had camped by a shallow waterhole which contained some stagnant water. It was very nauseating to have to drink such water after the clear springs of the mountains. Nevertheless, it saved them from dying of thirst. At sunset banks of dark clouds would float low across the sky, and give promise of heavy rain, but at sunrise the sky would be as bright and clear as before, At last even the supply of stagnant water was exhausted, and the two friends were in a desperate plight.

After some time the kangaroo spoke and said: "When my mother carried me in her pouch I remember such a drought as this. The birds fell from the trees, the animals died fighting around dry waterholes, and the trees withered and died. My mother travelled far with me, over the mountains and down by the river bed, but she travelled slowly, as hunger and thirst had made her very weak, and I was heavy to carry. Then another kangaroo spoke to her and said: 'Why do you carry such a heavy burden? You will surely die. Throw him into the bush and come with me, for I will travel fast and take you to water.' My mother would not leave me to die, but struggled on, and the other kangaroo left her to die from thirst. Wearied by her heavy burden, she struggled on until she again came to a sandy river bed. She now dug a deep hole in the sand, which slowly filled with cool, clear water. We camped by this waterhole until the rain came. I shall go to the river and see if I can dig and find water, for if we stay here we shall surely perish from thirst."

The native bear was delighted at the suggestion, and said: "Yes! Let us both go down to the river bed. I have very strong arms, and will help you." They made their way to the river, but, before reaching it, stumbled across some of their friends who had died of thirst. This made them very serious and determined. When they reached the river, the sun was very hot and they were very tired. The native bear suggested that the kangaroo should start digging, as he knew most about it. The kangaroo went to work with a will, and dug a deep hole, but no signs of water were visible. The kangaroo was exhausted with his work, and asked the native bear to help him. The native bear was very cunning, and said: "I would willingly help you, but I am feeling very ill; the sun is very hot, and I am afraid I am going to die." The kangaroo was very sorry for his friend, and set to work again without complaining.

At last his work was rewarded. A trickle of water appeared in the bottom of the hole, and gradually increased until it filled it to overflowing. The kangaroo went over to his friend, and, touching him gently on the shoulder, said: "I have discovered water, and will bring some to you." But the native bear was only shamming, and dashed straight to the waterhole without even replying to the surprised kangaroo. When the native bear bent down to drink the water his tail stuck out like a dry stick. The kangaroo, who could now see the despicable cunning of his friend, was very angry, and, seizing his boomerang, cut off the tail of the drinker as it projected above the waterhole. To this day the native bear has no tail as an evidence of his former laziness and cunning.

If you use Facebook or Google+ & enjoyed How The Native Bear Lost His Tail, please tell your friends and let us know to find more like it for you!