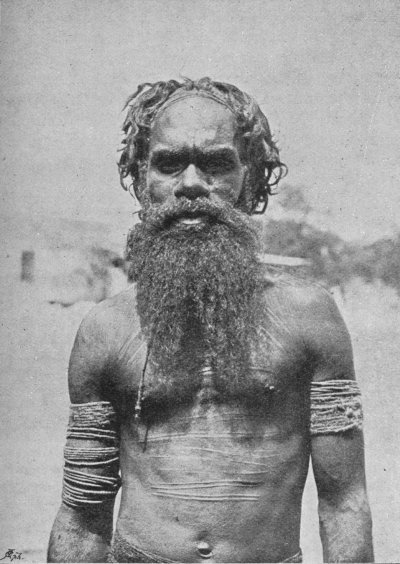 Many years ago, Mirram the kangaroo and Warreen the wombat were both men. They were very friendly, and hunted and lived together in the same camping-ground. Warreen had a very comfortable gunyah made of bark and soft leaves, but Mirram who was a careless fellow-did not trouble to build a home. He was content to sleep in the open, by the side of a big fire, with the blue sky for a cover, and the green grass for a couch. This open air life was very nice in fine weather, when the stars twinkled in the sky like golden fire-flies, but it was extremely uncomfortable in the rainy season.

One night a great storm arose. The wind howled eerily, and rocked the tall trees to and fro as though they were shaken by the strong arms of an invisible giant. The rain fell in torrents, and darkness covered the light of the stars. The rain quickly quenched the glowing embers of Mirram's fire, and he was left to the mercy of the storm. After shivering in the cold for some time, he decided to seek the hospitality of Warreen. "Surely my friend would not refuse me shelter on such a night as this," he thought. "I will ask him."

Feeling very cold and miserable, he crept to the opening of Warreen's tent, and seeing there was sufficient space for both of them to sleep comfortably, he woke him and said: "The storm has killed my fire. I am very wet, and the cold wind has chilled me to the bone. May I sleep in the corner of your tent?" Warreen blinked his eyes sleepily and answered in a gruff voice: "No. I want to place my head in that corner. There isn't any room." With this rude remark he moved into the corner, but, as he could not occupy the whole space of the tent, another corner became vacant. Mirram went away and sat by the wet ashes of his fire, and his thoughts were as miserable as the weather. The fury of the storm increased, and looking anxiously at the rainproof gunyah of his friend, he decided to approach Warreen again. He entered the shelter, and, touching Warreen gently on the shoulder, said: "The wind is very cold, and as biting as the teeth of the wild dog. The rain is falling heavily and will not cease. I should be grateful if you would allow me to sleep in that corner. I will not disturb you." Warreen raised his head, listened to the moaning of the storm outside, and then replied: "I will not have you here; there isn't any room. Go outside and do not keep waking me." "But," replied Mirram, "there is room in that corner. Surely you wouldn't drive me out into the storm to die!"

Thereupon, Warreen moved one leg into the corner and again a space became vacant. Seeing he could no longer hoodwink Mirram and hide from him his selfish intentions, he grew very angry and yelled: "Get out! Get out! I won't have you in my tent. I don't care where you die." This harsh treatment exasperated Mirram and he left the tent in a terrible rage. Outside the tent, he groped around in the dark until he found a large flat stone. Then he crept silently to the gunyah. By the sound of heavy breathing he knew Warreen was asleep. Moving very silently, he entered the tent, and, raising the stone high in his arms, dashed it on the head of the sleeper. The terrible blow did not kill Warreen but flattened his forehead. When he had recovered from his pained surprise, he heard the mocking voice of Mirram saying: "That is your reward for treating a friend so cruelly. You and your children and their children's children will wander through the land with flat foreheads that men may know them for your selfishness." As Warreen was no match for his opponent, he did not answer, but nursed his sore head and some very bad thoughts. From that moment, he was always planning revenge for his injury.

Some time later, Warreen was hunting in the forest, and, through the shadow of the trees, he saw Mirram a short distance ahead. He crept noiselessly towards him, and, when Mirram was looking for the marks of a possum on the bark of a tree, he threw a spear at him with all his strength. The spear struck Mirram at the bottom of the back, and so deeply did it enter that he could not pull it out. While he was struggling with the spear, Warreen walked up to him, and, in a bantering voice, said: "Aha! My turn has come at last. I have waited long to repay you. You will always carry the spear in your back and wander without a home while you live. Your children will carry the spear and be homeless for ever. By these tokens, men will always remember your attempt to kill me while I slept."

From that time the kangaroo has had a long tail, which makes a low, thudding sound as he wanders homeless through the bush, and the wombat still has a very flat forehead as an everlasting sign of selfishness.

If you use Facebook or Google+ & enjoyed How Kangaroo Got A Tail And Wombat Flat Forehead, please tell your friends and let us know to find more like it for you!