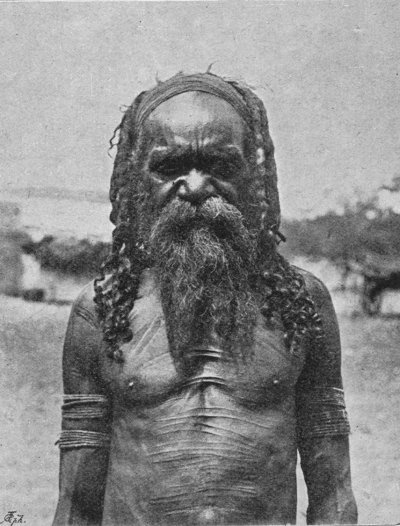 Ages ago--in the dream-time--many of the beautiful birds and timid animals now living in the bush were men. One day, towards sunset, a tribe of blacks were returning from the hunt, when they met a very old man carrying a long spear and an empty "dilly" bag. When he approached them he placed the spear in the ground as a token of peace, and said: "I have travelled far, my brothers, and many moons have gone since I left the hunting ground of my people. I have journeyed to the land where the voice of the great waters is like rolling thunder. I have passed beyond the mountains that are hidden in grey mist to the great red plains beyond, where there is neither bird nor beast, and the face of the sun is for ever hidden in a dark cloud. I have journeyed without resting to the land. that lies beyond the dawn, and many strange adventures have I known. Now I am old, and my people are scattered like dead leaves before the wind, and, before I seek them, I would rest with you a while. In return for your kindness, I will tell you the secret of the fire of the sun. He who is brave among you may then bring it to your tribe."

The headmen of the tribe decided to take the old man with them to their camping ground. When they arrived the evening meal was quickly prepared, and the choicest morsels were given to the weary traveller. The blacks then formed a circle around the old man, and eagerly awaited his story. At this time fire was unknown in the land. When the blacks enjoyed the warmth of the sun, they often wondered how they could take the fire from the sky in order to warm them when the snow fell like a great white mantle, and the cold wind howled eerily and chilled them to the bone. They did not know how to cook their food or harden their spear heads by fire, but for warmth alone they desired it. The old man crouched on his haunches, wrapped his possum skin rug around him, peered into the darkness of the bush as though he suspected a hidden enemy, and, having made himself comfortable, began to tell of his adventurous journey.

"Far to the east, beyond the mountains that hide the sun, I journeyed," he said. "The water no longer ran in the creeks, and the waterholes were dry. Many animals were dead in the bed of the river, to which they had come for water, and died from thirst. The shadow of death was across the land, and I hurried on without resting, lest it should fall across my path. One day, when my tongue was big in my mouth, and my legs were as weak as those of a child, I saw in the distance a gleaming waterhole. I ran towards it, but fell, many times before reaching it, so great was my weakness. At last I reached it, but the blackness of night fell upon me, and I slept, although the sun was high in the sky. When I awoke I heard a loud noise in my ears like the buzzing of many flies, and my legs would not support me. I dragged myself to the waterhole, and, bending my head low to drink, I touched the hot, dry sand with my mouth. That which I thought was water was a gleaming bed of sand. An evil spirit possessed me, and I dug deep into the sand until my hands were torn and bleeding. The sand became firmer, and at last a trickle of water appeared. It gradually increased until there was sufficient for me to drink. I rested there for a day, and then went on my way refreshed. After many days, I came to a land where grew many high trees. One morning, before the sun had climbed the mountains, I saw its fire gleaming through the trees. Being surprised at the sight, I cautiously drew nearer, and then I saw Mar-the Cockatoo-take the fire from under his crest and light his way with it. In my hurry I stood on a dry stick, and its crackling drew the cockatoo's attention to me. He threw a spear at me, and I was forced to flee. After many weary days and nights, I arrived at the camping ground of my people, but they were no longer there. Then I followed in their tracks until I met you. If there is one among your tribe who is brave enough to face the dangers of my long and weary journey, and take the fire from Mar, the cockatoo, then his name shall be a welcome word on all men's tongues until the end of time."

When they heard this story, the tribe were greatly excited. They all spoke together, and few were heard. At last they agreed to invite the cockatoo to a great corroboree, and, while he was enjoying himself, to steal the fire. The day arrived for the great feast. There was dancing and singing, and mock fighting. Then they offered Mar a choice piece of kangaroo flesh to eat, but he refused it. He was then offered the kangaroo skin, which he accepted and took away with him to his camp. The feast was over, and still they did not have the fire.

Prite, who was a very little fellow, decided to follow the cockatoo to his camp. He followed Mar over the mountains until he was very weary, and, just as he was about to turn back, he saw the cockatoo take the fire from under his crest feathers. He then returned to the camp and told the members of the tribe that the old man's story was true. The absorbing question was discussed late into the night, and at length it was agreed that Tatkanna, the Robin, should make the journey again, and endeavor to steal the coveted fire. Early the next morning he set out on his long journey, and, after travelling for some time, he reached the camp of the cockatoo. He arrived just in time to see Mar take the fire from his crest and light a fire stick. With this stick he singed off the hair of the kangaroo skin which the tribe had given him.

Tatkanna was so eager to steal the fire that he approached too close, and scorched his breast feathers-hence his name Robin Redbreast. When Tatkanna's feathers were scorched he was very frightened, but, as the cockatoo had seen him, he decided to act boldly. Running to the fire, he seized a fire stick and made off. In his hurry he set fire to the dry grass around him, and in a short time the whole bush was ablaze. The fire roared like the sound of flood waters in the mountains. Birds and animals raced before it in their efforts to gain the shelter of the green trees. But it swept all before it, and left a smoking black waste behind. When a tall tree fell, a shower of golden sparks flew high in the air, and the red reflection of the flames in the sky was like the rising of the sun.

When the cockatoo discovered that the fire was stolen, and beyond his control for all time, he was very angry. Taking his nulla-nullas, he went in search of Tatkanna to kill him. When Mar arrived at the camping ground of the tribe, Tatkanna, who was only a little fellow, was very frightened, and begged his friend Quartang, the Kookaburra, to take up his quarrel. Quartang agreed to do so, but he had not been fighting many minutes when he was beaten, and forced to fly into the trees, where he has remained ever since. Mar, the cockatoo, returned to his camp disconsolate. The tribe was very pleased with the robin for his bravery. When you see a red-crested cockatoo, you will remember how fire was stolen from him. He still has a beautiful red crest, and is known as Leadbeater's cockatoo. The robin redbreast also retains his scorched feathers in remembrance of his great feat.

If you use Facebook or Google+ & enjoyed How Fire Was Stolen From Red-Crested Cockatoo, please tell your friends and let us know to find more like it for you!