On one side of a hill grew the tall, waving corn, with its silk tassels and plumes. On another side, beans, with their velvety pods, climbed toward the sky. Some distance down a third slope, beautiful yellow squashes turned their faces to the sun.

After that, every morning at sunrise, a handsome young chief was seen to come and stand on the brow of the hill. On his head were shining red plumes. Tall, and strong, and splendid he stood, wrapped in the folds of his waving blanket, whose fringed tassels danced to the summer breeze.

One day, his voice reached the Squash Maiden, on the other side of the hill. The Squash Maiden drew about her a rich green blanket, into which she had woven many flaunting gold trumpet-shaped flowers. Then she ran swiftly to the young chieftain. 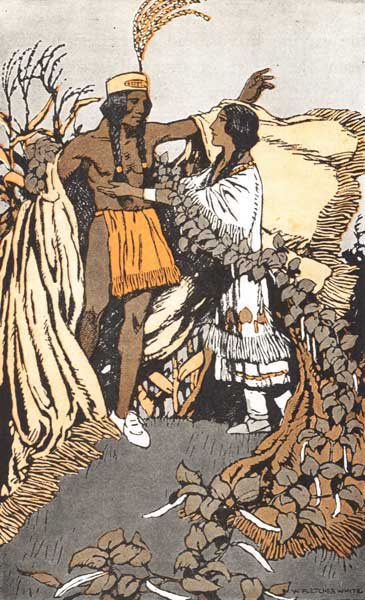 "Marry me! Marry me!" said the Squash Maiden, as she spread her beautiful gold and green blanket at his feet.

Corn Plume looked down at the Squash Maiden sitting on her blanket at his feet. She was good to look upon, and yet Corn Plume was not content. He wanted a maiden who would stand by his side, not always sit at his feet.

Then Corn Plume spoke thus to the Squash Maiden.

"Corn Plume cannot marry Squash Maiden. She is very beautiful, but she will not make song in Corn Plume's heart. Squash Maiden will grow tired of his lodge. She will not stay in his wigwam. She likes to go a long trail, and wander far from the lodge.

"Corn Plume cannot make Squash Maiden his wife, for he is not content with her. But she shall be Corn Plume's sister, and sit in his lodge whenever she will. The maiden Corn Plume weds must be ever at his side. She must go where he goes, stay where he stays."

This time his song reached the ears of the Bean Maiden. Her heart sang, when she heard the voice of Corn Plume, for she knew that he was calling her. So light of heart was Bean Maiden, that she ran like a deer up the hillside. On and on, up and over the brow of the hill she climbed, till she reached the young chieftain's side.

Then Corn Plume turned and beheld the most beautiful maiden he had ever seen. Her eyes were deep and dark, like mountain pools. Her breath was sweet as the waters of the maple. She threw off her blanket of green, and purple, and white, and stretched her twining arms to him.

Corn Plume desired to keep Bean Maiden forever close to him. He bent his tall plumed head to her. Her arms wound round and round the young chieftain, and Corn Plume was content.

So closely were the arms of Corn Plume and the Bean Maiden entwined, so truly were they wed, that the Indians never attempted to separate them. Ever after, corn and beans were planted in the same hill, and often a squash seed was added.

Since the Great Spirit had placed the corn, the bean, and the squash together on a hill, the Indian said they should continue to live and grow and occupy a hill together.

The door of Corn Plume's lodge was ever open to the Squash Maiden, if she chose to enter. But seldom did she stay in his wigwam. More often, she was found running off on a long trail.

But Bean Maiden remained true to Corn Plume. Always she was found by his side. Never did she leave the lodge unless he went with her. Corn Plume's lodge was her lodge, and her trail was his trail.

And because the Spirits of the corn and the bean are as one, the Indians not only plant and grow them together, but cook and eat them together. "In life, they were one," they say, "We will not separate them in death."

And now, when a great rustling and sighing of the corn is heard in the White man's land, the Indians often say, "'Tis the Spirit of Corn Plume, crying for his lost Bean Maiden!"

If you use Facebook or Google+ & enjoyed Corn Plume And Bean Maiden, please tell your friends and let us know to find more like it for you!