Once upon a time a king had a son named Prince Wicked. He was fierce and cruel, and he spoke to nobody without abuse, or blows. Like grit in the eye, was Prince Wicked to every one, both in the palace and out of it.

His people said to one another, "If he acts this way while he is a prince, how will he act when he is king?"

One day when the prince was swimming in the river, suddenly a great storm came on, and it grew very dark. 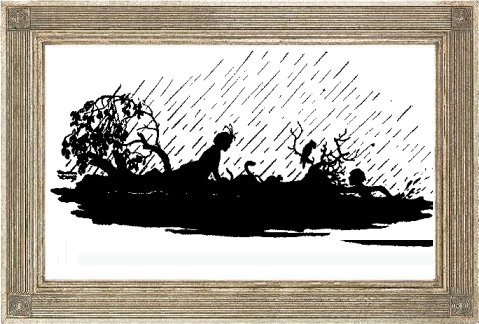 In the darkness the servants who were with the prince swam from him, saying to themselves, "Let us leave him alone in the river, and he may drown."

When they reached the shore, some of the servants who had not gone into the river said, "Where is Prince Wicked?"

"Isn't he here?" they asked. "Perhaps he came out of the river in the darkness and went home." Then the servants all went back to the palace.

The king asked where his son was, and again the servants said: "Isn't he here, O King? A great storm came on soon after we went into the water. It grew very dark. When we came out of the water the prince was not with us."

At once the king had the gates thrown open. He and all his men searched up and down the banks of the river for the missing prince. But no trace of him could be found.

In the darkness the prince had been swept down the river. He was crying for fear he would drown when he came across a log. He climbed upon the log, and floated farther down the river.

When the great storm arose, the water rushed into the homes of a Rat and a Snake who lived on the river bank. The Rat and the Snake swam out into the river and found the same log the prince had found. The Snake climbed upon one end of the log, and the Rat climbed upon the other.

On the river's bank a cottonwood-tree grew, and a young Parrot lived in its branches. The storm pulled up this tree, and it fell into the river. The heavy rain beat down the Parrot when it tried to fly, and it could not go far. Looking down it saw the log and flew down to rest. Now there were four on the log floating down stream together.

Just around the bend in the river a certain poor man had built himself a hut. As he walked to and fro late at night listening to the storm, he heard the loud cries of the prince. The poor man said to himself: "I must get that man out of the water. I must save his life." So he shouted: "I will save you! I will save you!" as he swam out in the river.

Soon he reached the log, and pushing it by one end, he soon pushed it into the bank. The prince jumped up and down, he was so glad to be safe and sound on dry land. 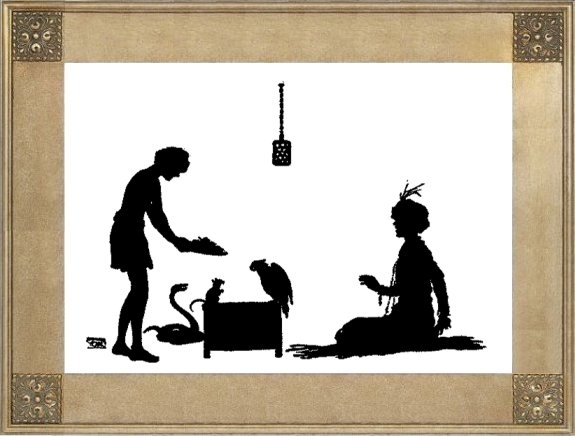 Then the poor man saw the Snake, the Rat, and the Parrot, and carried them to his hut. He built a fire, putting the animals near it so they could get dry. He took care of them first, because they were the weaker, and afterwards he looked after the comfort of the prince.

Then the poor man brought food and set it before them, looking after the animals first and the prince afterwards. This made the young prince angry, and he said to himself: "This poor man does not treat me like a prince. He takes care of the animals before taking care of me." Then the prince began to hate the poor man.

A few days later, when the prince, and the Snake, the Rat, and the Parrot were rested, and the storm was all over, the Snake said good-by to the poor man with these words:

"Father, you have been very kind to me. I know where there is some buried gold. If ever you want gold, you have only to come to my home and call, 'Snake!' and I will show you the buried gold. It shall all be yours."

Next the Rat said good-by to the poor man. "If ever you want money," said the Rat, "come to my home, and call out, 'Rat!' and I will show you where a great deal of money is buried near my home. It shall all be yours."

Then the Parrot came, saying: "Father, silver and gold have I none, but if you ever want choice rice, come to where I live and call, 'Parrot!' and I will call all my family and friends together, and we will gather the choicest rice in the fields for you."

Last came the prince. In his heart he hated the poor man who had saved his life. But he pretended to be as thankful as the animals had been, saying, "Come to me when I am king, and I will give you great riches." So saying, he went away.

Not long after this the prince's father died, and Prince Wicked was made king. He was then very rich.

By and by the poor man said to himself: "Each of the four whose lives I saved made a promise to me. I will see if they will keep their promises."

First of all he went to the Snake, and standing near his hole, the poor man called out, "Snake!"

At once the Snake darted forth, and with every mark of respect he said: "Father, in this place there is much gold. Dig it up and take it all."

After visiting for a while, the poor man said good-by to the Snake, and went to where the Rat lived, calling out, "Rat!"

The Rat came at once, and did as the Snake had done, showing the poor man where the money was buried.

Going next to the Parrot, he called out, "Parrot!" and the bird flew down from the tree-top as soon as he heard the call.

"O Father," said the Parrot, "shall I call together all my family and friends to gather choice rice for you?"

The poor man, seeing that the Parrot was willing and ready to keep his promise, said: "I do not need rice now. If ever I do, I will not forget your offer."

Last of all, the poor man went into the city where the king lived. The king, seated on his great white elephant, was riding through the city. The king saw the poor man, and said to himself: "That poor man has come to ask me for the great riches I promised to give him. I must have his head cut off before he can tell the people how he saved my life when I was the prince."

So the king called his servants to him and said: "You see that poor man over there? Seize him and bind him, beat him at every corner of the street as you march him out of the city, and then chop off his head."

The servants had to obey their king. So they seized and bound the poor man. They beat him at every corner of the street. The poor man did not cry out, but he said, over and over again, "It is better to save poor, weak animals than to save a prince."

At last some wise men among the crowds along the street asked the poor man what prince he had saved. Then the poor man told the whole story, ending with the words, "By saving your king, I brought all this pain upon myself."

The wise men and all the rest of the crowd cried out: "This poor man saved the life of our king, and now the king has ordered him to be killed. How can we be sure that he will not have any, or all, of us killed? Let us kill him." And in their anger they rushed from every side upon the king as he rode on his elephant, and with arrows and stones they killed him then and there.

Then they made the poor man king, and set him to rule over them.

The poor man ruled his people well. One day he decided once more to try the Snake, the Rat, and the Parrot. So, followed by many servants, the king went to where the Snake lived.

At the call of "Snake!" out came the Snake from his hole, saying, "Here, O King, is your treasure; take it."

Then the king had his servants dig up the gold.

Going to where the Rat lived, the king called, "Rat!" Out came the Rat, and bowing low to the king, the Rat said, "Take all the money buried here and have your servants carry it away."

"I will," said the king, and he asked the Rat to go with him and the Snake.

Then the king went to where the Parrot lived, and called, "Parrot!" The Parrot flew down to the king's feet and said, "O King, shall I and my family and my friends gather choice rice for you?"

"Not now, not until rice is needed," said the king. "Will you come with us?" The Parrot was glad to join them. 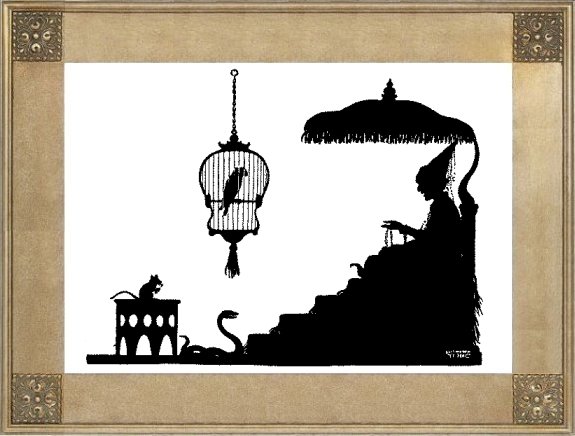 So with the gold, and the money, and with the Snake, the Rat, and the Parrot as well, the king went back to the city.

The king had the gold and the money hidden away in the palace. He had a tube of gold made for the Snake to live in. He had a glass box made for the Rat's home, and a cage of gold for the Parrot. Each had the food he liked best of all to eat every day, and so these four lived happily all their lives.

If you use Facebook or Google+ & enjoyed Prince Wicked And The Grateful Animals, please tell your friends and let us know to find more like it for you!