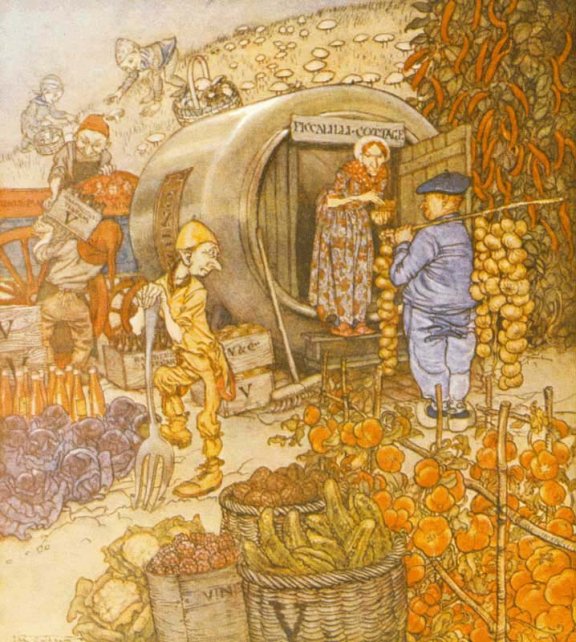 Mr. and Mrs. Vinegar, a worthy couple, lived in a glass pickle-jar. The house, though small, was snug, and so light that each speck of dust on the furniture showed like a mole-hill; so while Mr. Vinegar tilled his garden with a pickle-fork and grew vegetables for pickling, Mrs. Vinegar, who was a sharp, bustling, tidy woman, swept, brushed, and dusted, brushed and dusted and swept to keep the house clean as a new pin. Now one day she lost her temper with a cobweb and swept so hard after it that bang! bang! the broom-handle went right through the glass, and crash! crash! clitter! clatter! there was the pickle-jar house about her ears all in splinters and bits.

She picked her way over these as best she might, and rushed into the garden.

"Oh, Vinegar, Vinegar!" she cried. "We are clean ruined and done for! Quit these vegetables! they won't be wanted! What is the use of pickles if you haven't a pickle-jar to put them in, and - I've broken ours - into little bits!" And with that she fell to crying bitterly.

But Mr. Vinegar was of different mettle; though a small man, he was a cheerful one, always looking at the best side of things, so he said, "Accidents will happen, lovey! But there are as good pickle-bottles in the shop as ever came out of it. All we need is money to buy another. So let us go out into the world and seek our fortunes."

"But what about the furniture?" sobbed Mrs. Vinegar.

"I will take the door of the house with me, lovey," quoth Mr. Vinegar stoutly. "Then no one will be able to open it, will they?"

Mrs. Vinegar did not quite see how this fact would mend matters, but, being a good wife, she held her peace. So off they trudged into the world to seek fortune, Mr. Vinegar bearing the door on his back like a snail carries its house.

Well, they walked all day long, but not a brass farthing did they make, and when night fell they found themselves in a dark, thick forest. Now Mrs. Vinegar, for all she was a smart, strong woman, was tired to death, and filled with fear of wild beasts, so she began once more to cry bitterly; but Mr. Vinegar was cheerful as ever.

"Don't alarm yourself, lovey," he said. "I will climb into a tree, fix the door firmly in a fork, and you can sleep there as safe and comfortable as in your own bed."

So he climbed the tree, fixed the door, and Mrs. Vinegar lay down on it, and being dead tired was soon fast asleep. But her weight tilted the door sideways, so, after a time, Mr. Vinegar, being afraid she might slip off, sate down on the other side to balance her and keep watch.

Now in the very middle of the night, just as he was beginning to nod, what should happen but that a band of robbers should meet beneath that very tree in order to divide their spoils. Mr. Vinegar could hear every word said quite distinctly, and began to tremble like an aspen as he listened to the terrible deeds the thieves had done to gain their ends.

"Don't shake so!" murmured Mrs. Vinegar, half asleep. "You'll have me off the bed."

"I'm not shaking, lovey," whispered back Mr. Vinegar in a quaking voice. "It is only the wind in the trees."

But for all his cheerfulness he was not really very brave inside, so he went on trembling and shaking, and shaking and trembling, till, just as the robbers were beginning to parcel out the money, he actually shook the door right out of the tree-fork, and down it came - with Mrs. Vinegar still asleep upon it - right on top of the robbers' heads!

As you may imagine, they thought the sky had fallen, and made off as fast as their legs would carry them, leaving their booty behind them. But Mr. Vinegar, who had saved himself from the fall by clinging to a branch, was far too frightened to go down in the dark to see what had happened. So up in the tree he sate like a big bird until dawn came.

Then Mrs. Vinegar woke, rubbed her eyes, yawned, and said, "Where am I?"

"On the ground, lovey," answered Mr. Vinegar, scrambling down.

And when they lifted up the door, what do you think they found?

One robber squashed flat as a pancake, and forty golden guineas all scattered about!

My goodness! How Mr. and Mrs. Vinegar jumped for joy!

"Now, Vinegar!" said his wife when they had gathered up all the gold pieces, "I will tell you what we must do. You must go to the next market-town and buy a cow; for, see you, money makes the mare to go, truly; but it also goes itself. Now a cow won't run away, but will give us milk and butter, which we can sell. So we shall live in comfort for the rest of our days."

"What a head you have, lovey!" said Mr. Vinegar admiringly, and started off on his errand.

"Mind you make a good bargain," bawled his wife after him.

"I always do," bawled back Mr. Vinegar. "I made a good bargain when I married such a clever wife, and I made a better one when I shook her down from the tree. I am the happiest man alive!"

So he trudged on, laughing and jingling the forty gold pieces in his pocket.

Now the first thing he saw in the market was an old red cow.

"I am in luck to-day," he thought; "that is the very beast for me. I shall be the happiest of men if I get that cow." So he went up to the owner, jingling the gold in his pocket.

"What will you take for your cow?" he asked.

And the owner of the cow, seeing he was a simpleton, said, "What you've got in your pocket."

"Done!" said Mr. Vinegar, handed over the forty guineas, and led off the cow, marching her up and down the market, much against her will, to show off his bargain.

Now, as he drove it about, proud as Punch, he noticed a man who was playing the bagpipes. He was followed about by a crowd of children who danced to the music, and a perfect shower of pennies fell into his cap every time he held it out.

"Ho, ho!" thought Mr. Vinegar. "That is an easier way of earning a livelihood than by driving about a beast of a cow! Then the feeding, and the milking, and the churning! Ah, I should be the happiest man alive if I had those bagpipes!"

So he went up to the musician and said, "What will you take for your bagpipes?"

"Well," replied the musician, seeing he was a simpleton, "it is a beautiful instrument, and I make so much money by it, that I cannot take anything less than that red cow."

"Done!" cried Mr. Vinegar in a hurry, lest the man should repent of his offer.

So the musician walked off with the red cow, and Mr. Vinegar tried to play the bagpipes. But, alas and alack! though he blew till he almost burst, not a sound could he make at first, and when he did at last, it was such a terrific squeal and screech that all the children ran away frightened, and the people stopped their ears.

But he went on and on, trying to play a tune, and never earning anything, save hootings and peltings, until his fingers were almost frozen with the cold, when of course the noise he made on the bagpipes was worse than ever.

Then he noticed a man who had on a pair of warm gloves, and he said to himself, "Music is impossible when one's fingers are frozen. I believe I should be the happiest man alive if I had those gloves."

So he went up to the owner and said, "You seem, sir, to have a very good pair of gloves." And the man replied, "Truly, sir, my hands are as warm as toast this bitter November day."

That quite decided Mr. Vinegar, and he asked at once what the owner would take for them; and the owner, seeing he was a simpleton, said, "As your hands seem frozen, sir, I will, as a favour, let you have them for your bagpipes."

"Done!" cried Mr. Vinegar, delighted, and made the exchange.

Then he set off to find his wife, quite pleased with himself. "Warm hands, warm heart!" he thought. "I'm the happiest man alive!"

But as he trudged he grew very, very tired, and at last began to limp. Then he saw a man coming along the road with a stout stick.

"I should be the happiest man alive if I had that stick," he thought. "What is the use of warm hands if your feet ache!" So he said to the man with the stick, "What will you take for your stick?" and the man, seeing he was a simpleton, replied:

"Well, I don't want to part with my stick, but as you are so pressing I'll oblige you, as a friend, for those warm gloves you are wearing."

"Done for you!" cried Mr. Vinegar delightedly; and trudged off with the stick, chuckling to himself over his good bargain.

But as he went along a magpie fluttered out of the hedge and sate on a branch in front of him, and chuckled and laughed as magpies do. "What are you laughing at?" asked Mr. Vinegar.

"At you, forsooth!" chuckled the magpie, fluttering just a little further. "At you, Mr. Vinegar, you foolish man - you simpleton - you blockhead! You bought a cow for forty guineas when she wasn't worth ten, you exchanged her for bagpipes you couldn't play - you changed the bagpipes for a pair of gloves, and the pair of gloves for a miserable stick. Ho, ho! Ha, ha! So you've nothing to show for your forty guineas save a stick you might have cut in any hedge. Ah, you fool! you simpleton! you blockhead!"

And the magpie chuckled, and chuckled, and chuckled in such guffaws, fluttering from branch to branch as Mr. Vinegar trudged along, that at last he flew into a violent rage and flung his stick at the bird. And the stick stuck in a tree out of his reach; so he had to go back to his wife without anything at all. 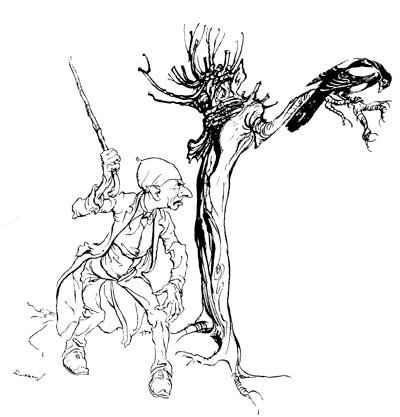 But he was glad the stick had stuck in a tree, for Mrs. Vinegar's hands were quite hard enough.

When it was all over Mr. Vinegar said cheerfully, "You are too violent, lovey. You broke the pickle-jar, and now you've nearly broken every bone in my body. I think we had better turn over a new leaf and begin afresh. I shall take service as a gardener, and you can go as a housemaid, until we have enough money to buy a new pickle-jar. There are as good ones in the shop as ever came out of it."

And that is the story of Mr. and Mrs. Vinegar. 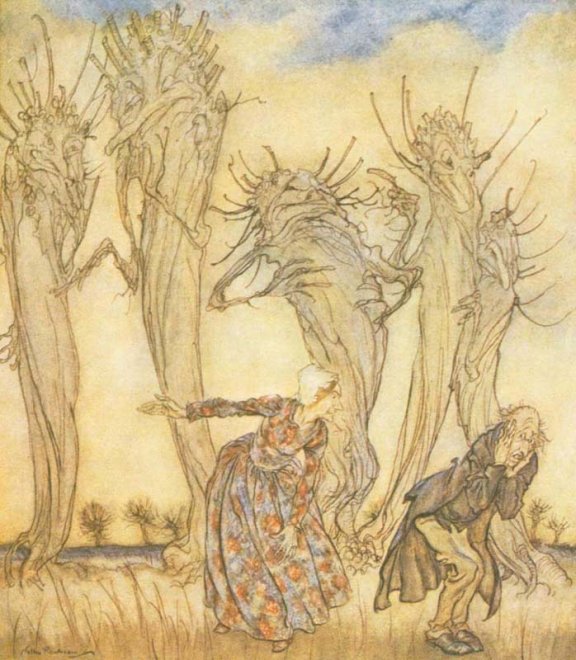 If you use Facebook or Google+ & enjoyed Mr And Mrs Vinegar, please tell your friends and let us know to find more like it for you!