Many years ago there lived in England a wise and good king whose name was Alfred. No other man ever did so much for his country as he; and people now, all over the world, speak of him as Alfred the Great.

In those days a king did not have a very easy life. There was war almost all the time, and no one else could lead his army into battle so well as he. And so, between ruling and fighting, he had a busy time of it indeed.

A fierce, rude people, called the Danes, had come from over the sea, and were fighting the English. There were so many of them, and they were so bold and strong, that for a long time they gained every battle. If they kept on, they would soon be the masters of the whole country.

At last, after a great battle, the English army was broken up and scattered. Every man had to save himself in the best way he could. King Alfred fled alone, in great haste, through the woods and swamps.

Late in the day the king came to the hut of a woodcutter. He was very tired and hungry, and he begged the woodcutter's wife to give him something to eat and a place to sleep in her hut.

The woman was baking some cakes upon the hearth, and she looked with pity upon the poor, ragged fellow who seemed so hungry. She had no thought that he was the king.

"Yes," she said, "I will give you some supper if you will watch these cakes. I want to go out and milk the cow; and you must see that they do not burn while I am gone."

King Alfred was very willing to watch the cakes, but he had far greater things to think about. How was he going to get his army together again? And how was he going to drive the fierce Danes out of the land? He forgot his hunger; he forgot the cakes; he forgot that he was in the woodcutter's hut. His mind was busy making plans for tomorrow. 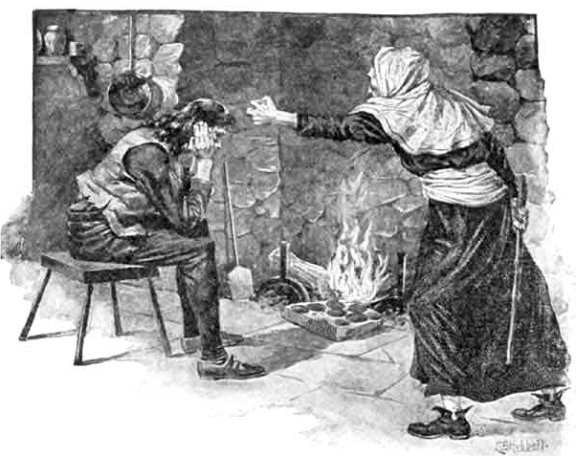 In a little while the woman came back. The cakes were smoking on the hearth. They were burned to a crisp. Ah, how angry she was!

"You lazy fellow!" she cried. "See what you have done! You want something to eat, but you do not want to work!"

I have been told that she even struck the king with a stick; but I can hardly believe that she was so ill-natured.

The king must have laughed to himself at the thought of being scolded in this way; and he was so hungry that he did not mind the woman's angry words half so much as the loss of the cakes.

I do not know whether he had anything to eat that night, or whether he had to go to bed without his supper. But it was not many days until he had gathered his men together again, and had beaten the Danes in a great battle.

If you use Facebook or Google+ & enjoyed King Alfred And The Cakes, please tell your friends and let us know to find more like it for you!