Down in the heart of the woods there was a clear spring with water like silver. No shepherds ever brought their flocks there to drink, no lions nor other wild beasts came in the night time. No leaves nor branches fell into it, but the green grass grew around it all the year, and the rocks kept it from the sun.

One day a boy hunter found it, and, being thirsty, he stooped down to drink. As he bent he saw, for the first time in his life, his own fair face, and did not know who it was.

He thought it must be a water fairy, and he put his lips to the water, but as soon as their touch disturbed the surface, away went the shadow-face from out of his sight.

"Nothing has escaped me yet, and here I shall stay till this curly-haired creature comes out of the water," he said. "See its shining eyes and smiling mouth!"

He forgot his hunt, he forgot everything but to watch for this water sprite. When the moon and stars came out, there it was just the same as in the sunshine, and so he lingered from day to night and from night to day.

He saw the face in the water grow thinner day by day, but never thought of himself. At last he was too weak to watch any longer. His face was as white as the whitest lily, and his yellow hair fell over his hollow cheeks. With a sigh his breath floated away, his head dropped on the green grass, and there was no longer any face in the water. 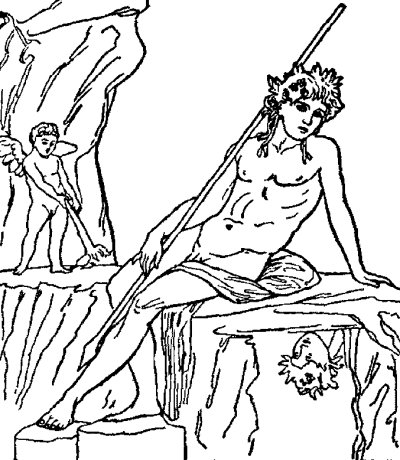 The fairies came out of the woods and would have covered him with earth, but, looking for him, they found nothing but a lovely flower, gazing with bended head into the silver spring, just as the boy hunter had done.

The fairies told the story to a little child, and she told it to her father and mother. When they found this spring in the heart of the woods they called the flower growing beside it Narcissus, after the boy hunter who had perished watching his own face in the silver water.

If you use Facebook or Google+ & enjoyed Why The Narcissus Grows By The Water, please tell your friends and let us know to find more like it for you!