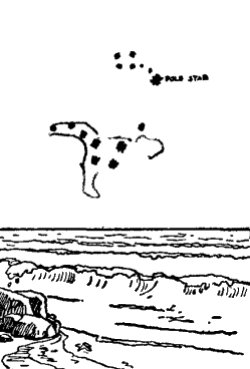 "Oh mother, what do you think? Last night that English boy, Charlie Thornton, asked me if I knew where Charles' Wain was, and when I said I didn't know, what do you suppose he showed me? Why, nothing but the Big Dipper up there among the stars. I told him he was mistaken and that nobody ever called it the odd name he had for it. But he said his mother called it that, and he wouldn't give it up. Wasn't that queer?"

"Why, no, Ralph, I don't think it was strange that he called it as his mother had taught him. That is exactly what you do. Many English people call it Charles' Wain. Wain means wagon, and it does look a little like a cart or wagon."

"I don't think it does, not the least bit. It looks just like a big dipper, and like nothing else."

"Why, you silly boy! What would you think if I should tell you that ever so many people call it the Great Bear?"

"Why, that is queerer yet. Can you see a bear up there in the sky? Maybe when it thunders it is the Great Bear growling!" and Ralph jumped off the porch and rolled on the grass, laughing at his discovery.

In a moment a thought seemed to come to him, and springing up, he ran to his mother's chair on the porch and said: "Mother, is there any story about the Great Bear? How did it get up there among the stars? Is the North Star the Bear's eye? Does his nose always point to the North Star, the same as the two pointers in the Big Dipper?"

"Now, my boy, you will be surprised again when I tell you that there are two bears in the sky, the Great Bear and the Little Bear. The wonderful North Star is in the tip of the tail of the Little Bear."

"Now, I know there is a story about them, just as there was about those three beautiful ones you showed me in Orion's belt. You told me about Orion, now you will tell me about the two bears, won't you?"

"It is a sad story, Ralph, and you know you don't like sad stories. But I will tell it to you, and sometime, in the years to come, you may read it in a language that is as old as the story.

"Near a beautiful city on the other side of the world was a large forest. The trees in this forest were very tall, and their branches so thick that they made a roof over the ground below. One could wander for miles and miles in the shade of this forest and never find a house, or any living creatures but the birds and wild animals.

"Once on a time some hunters came back, after having been gone many days, and said that away in the heart of the forest they had had a glimpse of a beautiful snow-white bear. Not one of them had been able to get a shot at it with his arrows, and some thought it was only a dream. The story spread throughout the city, and all the boys and young hunters were anxious for a chance to win so fine a prize as the snow-white skin. Not for himself, oh, no, for whoever brought it home must hang it in the temple.

"One brave young hunter said, 'I am going into the heart of the forest. I will take only the bravest with me, and I will never return without the prize.'

"This young man was dearly loved by everyone. His mother had left him when he was only a few years old, and gone, no one knew where. He was cared for by his uncle, and grew up, hoping each year his mother would return. He took long journeys trying to learn if she were still alive, but no one could ever tell him a word about her. These journeys had made him very bold and brave, and there was no cave so dark, nor mountain so high, but that he would search it in the hope of finding his mother.

"He found six young hunters ready to go with him into the heart of the forest. They looked very fine in their bright, shining hunting-suits, with their bows and arrows, and every one wished them success.

"They wasted no time in the pleasant fields outside, but started for the dark, sunless forest. It was slow work picking their way through the tangled bushes growing under the trees, and it took many days to reach the place described by the hunters who had told them the story of the strange white bear.

"'Whoever sees it first must call to the others. It may be that this is enchanted ground, and something dreadful will happen to the one who is alone,' said the leader of the hunting party.

"'It is well said,' they all agreed. In the heart of this wild forest they wandered, shooting the strange birds they saw there, and saving the long feathers and wings, to bring home after the hunt was over.

"One day the leader of the hunt chased a wonderful bird for hours from tree to tree, riding beneath the branches, trying to get a shot.

"At last, just as he had his arrow in his bow, ready to aim, his horse reared and nearly threw him backward to the ground. There, beside him, stood the snow-white bear.

"Its two fore paws were stretched out to meet him, and its eyes seemed full of the love he used to see in his mother's eyes. It was a beautiful sight, and the arrow meant for the bird shot upward into the sky, harming no one, but bearing the next words of the hunter as a message to the great Jupiter.

"'O, my mother, let me live forever with you!' exclaimed the hunter, as his strong arms were clasped about the white bear's neck.

"'My mother is found!' he shouted, and Echo repeated over and over, 'Found! Found!' until the six fellow hunters came to where the mother and her son were standing, gazing with loving eyes toward Mount Olympus, the home of their gods.

"The winged arrow had taken its flight to Jupiter and the son's prayer was answered. 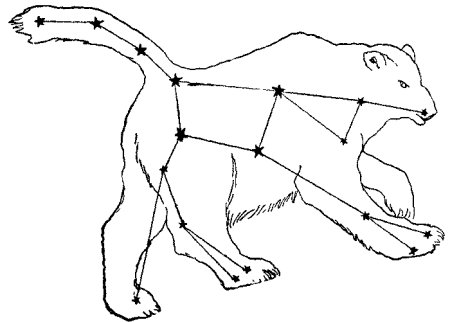 "Jupiter's lightnings flashed and the six hunters saw their strong leader change into the Great Bear, and gently guide his mother, the Little Bear, to her home in the sky. He took his place near her, at Jupiter's command, and now follows wherever she leads. He points forever to her and to the North Star which she keeps. Those who watch this unchanging beacon among the stars sometimes remember that the people of long ago thought that it was placed there to tell them of the unchanging love of mothers."

"Oh, I knew there was a story. It came out all right at last, and that takes the sad part away."

Then Ralph whispered, "We know it was only a myth, don't we?"

If you use Facebook or Google+ & enjoyed The Great Bear in the Sky, please tell your friends and let us know to find more like it for you!