Years ago there was a beautiful girl who lived near a large garden. This girl's name was Clytie. She had wonderful golden hair and big brown eyes, and she was tall and slender.

Clytie stood in this large garden one day, watching her pet doves as they flew about in the sky, when she caught a glimpse of the sun chariot of Apollo. She even had a glimpse of Apollo himself, as he guided his wonderful horses along their course, which was the circle of the heavens. There were many fleecy clouds in the sky, and one had veiled the burning sunlight from the eyes of Clytie, or she would never have been able to see the sight, which only the eyes of Jupiter's eagle may endure and not become blind.

After this the foolish girl went every day into the garden and, staring up into the sky, tried to see Apollo once more. Every day for more than thirty days she went into the garden. Her mother often told her that she would make Apollo angry, for he shines brightly so as to hide himself from people on the earth.

"Clytie! Clytie!" her mother would call, "come in and take your sewing." 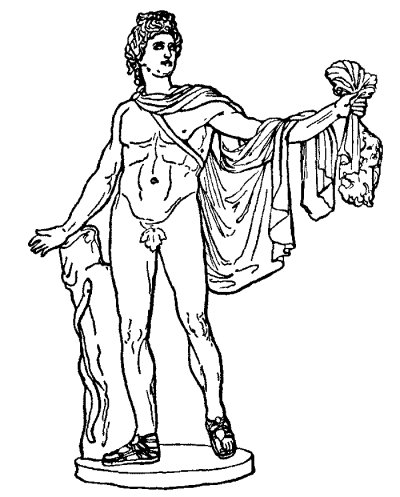 But Clytie never would obey. Sometimes she would answer:

"Oh, mother, let me stay. He was so beautiful. I have no heart for work."

Apollo saw the foolish girl day after day and he became out of patience with her.

"Mortal maidens must obey their mothers," he said, and a burning sun-arrow fell on Clytie's bright head.

Such a strange change came upon Clytie from that moment. Her brown eyes grew larger. Her golden hair stood straight out around them, and her pretty clothing changed into great heart-shaped leaves which clung to a stiff stalk. Her feet grew firmly into the ground, and the ten little toes changed into ten strong roots that went creeping everywhere for water.

When Clytie's mother called again no answer came and she found, in going into the garden, a flower in place of her child.

And now Clytie always stares at the sun all day long. In the morning her face is toward the east, and at night it is toward the west.

Did you ever think that the sunflower was once a lovely girl?

If you use Facebook or Google+ & enjoyed The Girl Who Was Changed Into A Sunflower, please tell your friends and let us know to find more like it for you!