It is an easy matter for any one to find the three great stars in the sky that are arranged in a row, like three great diamonds sparkling on the front of a mammoth crown. They shine out, clear and bright, whenever Diana takes her silver bow, which we call the moon, and goes to hunt in her secret fields or forests. These three stars have been called Orion's Belt for thousands of years, and for ages children and grown people have watched for their coming after the sun has gone below the horizon.

The story told of Orion by the ancient Greeks has been repeated by some of our poets, and Henry W. Longfellow has written in his own beautiful way of this same famous Greek hunter who never knew fear. Perhaps you will be more interested in his poem after you have read this short account of the mighty giant whose belt of stars is longer than other giants were tall.

Orion was the son of Neptune, the god of the sea. His father gave him power to walk upon the water or to wade in the deepest ocean without drowning. You know that if he had the power of walking in such places, he did not need to swim, and his steps were so long that he could walk much faster than his swiftest enemy could run. 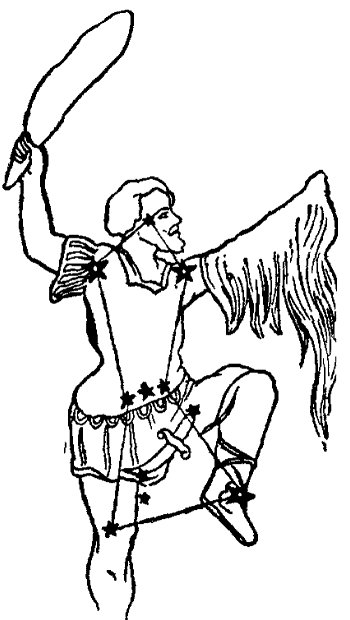 Orion was very fond of hunting, and wore, as his mantle or robe, the tawny skin of a huge lion he had slain. His club and his sword were his only weapons, and he needed no others, for his long arms helped him to strike before he himself could be hurt. Once he was made blind, but as he wandered by the seashore the music of the singing waves which were his father's home gave him comfort and led him to a friend who guided him to Apollo. One bright sunbeam from Apollo's crown touched Orion's eyes and they saw more clearly than ever before. Nearly everything was Orion's friend, for with his great strength he was always ready to help those who could not help themselves. But he was so huge that many who did not know him were afraid, and one day the Pleiads, daughters of Atlas, saw him coming and they fled away so fast that they were changed into doves. You can find the place where they alighted in the sky, just ahead of Orion. He still follows them, and his dog Sirius, who carries the famous dog star, is close at his side; but the Pleiads never allow Orion to overtake them in their long journey through the regions of the sky. The Pleiads are so beautiful that you must learn to find them, and this cluster of six twinkling stars, "a swarm of fireflies tangled in a silver braid," will guide you in finding the belt of the mighty hunter Orion, the giant of the heavens. Four other very brilliant stars mark his shoulders and his knees.

If you use Facebook or Google+ & enjoyed The Giant With A Belt Of Stars, please tell your friends and let us know to find more like it for you!