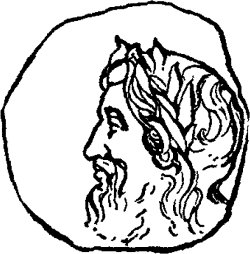 "Why do they call the eagle Jupiter's bird, Miss Folsom?"

"Where did you ever hear it called that, Mary?"

"It was in a book from which our teacher was reading a story to-day. She let me take the book and there was a fine picture of an eagle on the first page and it was marked 'Jupiter's bird.' I never knew exactly who Jupiter was. Was he a real person, Miss Folsom?"

"He was one of the three great gods whom the Romans used to believe in, Mary. They thought he ruled the sky and everything in it, and all living things on earth, both the gods and the men. His bird was the eagle, which carried the lightning in its claws. At Jupiter's command thunderbolts dashed against the hardest rocks and broke them into powder. No one dared to disobey him but his wife, Juno, and sometimes even she had to suffer for doing so.

"Jupiter's father was Saturn, who was kind and good in every way but one. He did not love his children, and, at the end of each year, one went away never to return. Jupiter, in some way, was stronger than the rest and refused to go when the order came. He even fought with the messenger and made him beg for mercy. 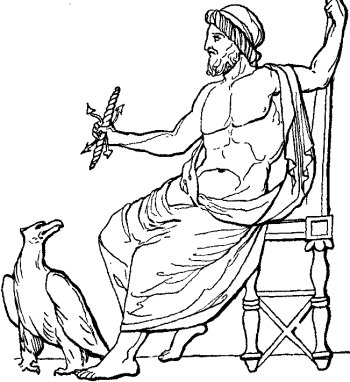 Then Jupiter sent this messenger to Saturn, who agreed to bring back to life Jupiter's brothers and sisters. They all rose up and sent Saturn away forever, and gave the kingdom to the three bravest sons. Neptune took the ocean, Pluto the center of the earth, and Jupiter the skies. They reigned until men had learned wisdom and had become too wise to be ruled by so many gods.

"Now Jupiter is the name of the largest planet, and when you see a great beautiful star in the sky, shining almost like the moon, you may be sure it is Jupiter. You can fancy he is looking down to see if Neptune is holding his unruly winds and waves in check, or if Pluto is still keeping guard over the watch-fires in the center of the earth.

"So Jupiter still reigns, but no one now is afraid of his power."

"How wicked of Saturn to put away his children! How could he?"

"Saturn is the same as old Father Time, Mary. Doesn't he put away one of his children every twelve months?"

"Year after year goes away, never to return."

"How could Saturn bring them back, then?"

"I don't know what that part of the story means. Maybe we will find out sometime. But can you think of any day of the week that might be named after Saturn?"

"Why, Saturday! surely that is the one, isn't it?"

"Yes, and the weeks never return either, do they, Mary?"

If you use Facebook or Google+ & enjoyed Jupiter, God of the Southern Sky, please tell your friends and let us know to find more like it for you!