Among the star pictures in the sky may be found one called Gemini, or the Twins. The ancient Greeks used to believe that twin brothers named Castor and Pollux had been really placed in the sky. They once lived in Sparta; their mother was the lovely Leda, and one of their sisters was the beautiful Helen, whose capture caused the famous Trojan war.

These brothers were as devoted to each other as twins are said to be, and one was never seen without the other being near. Their love for their sisters was very great, and once when Helen was captured by two noted warriors, these twin brothers of hers found her and brought her safely back to their mother's house. 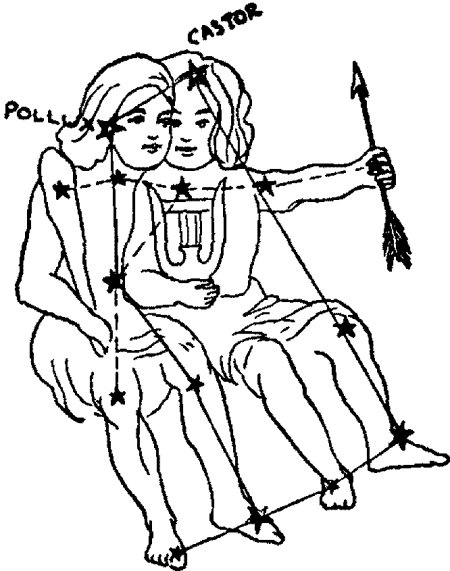 Castor was very fond of horses. He could tame the wildest one that was ever caught, and lead it about like a pet dog as soon as his magic touch had taught its fiery spirit that he was its master. He could ride better than any one in the kingdom, for no horse had ever thrown him.

Pollux was just as famous in boxing and wrestling. He taught young men many tricks with the hand and foot, and was the leader in all games.

The two brothers were proud to be allowed to go with the other heroes in quest of the golden fleece. When the sweet music of Orpheus stilled the wild storm that arose on the sea and threatened to wreck the Argo, stars appeared upon the heads of Castor and Pollux, for their great love for each other was known to the Olympian gods who had sent the storm.

When the curious flames, that sometimes during storms play about the masts and sails of a ship, were seen on other ships after this voyage of the Argo, the sailors would always cry out, "See the stars of Castor and Pollux!"

Their love for each other made them more famous than anything else. When at last Castor was slain in a great battle, Pollux prayed Jupiter to let them be again united. The prayer was granted. Not long after this, the poets tell us, the star picture of the Twins was discovered in the sky, and there the two loving brothers stay forever watching the earth to see if they may help others to be faithful to the end.

If you use Facebook or Google+ & enjoyed Castor And Pollux, The Starry Twins, please tell your friends and let us know to find more like it for you!