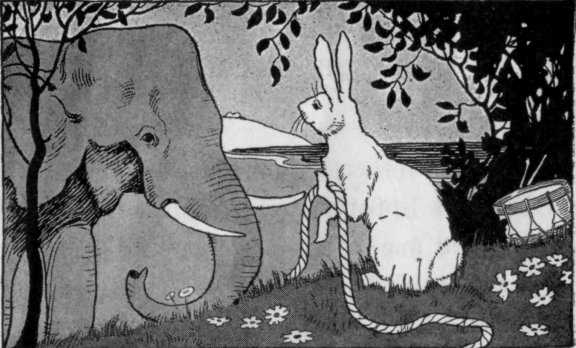 Brother Rabbit said, "I'd like to know what they are talking about." So he crouched down behind some bushes and listened.

This is what Brother Rabbit heard the whale say:

"Very good, very good," trumpeted the elephant. "That suits me. You keep the sea, and I will keep the land."

"That's a bargain," said the whale, as he swam away.

Brother Rabbit laughed to himself. "They won't rule me," he said, as he ran off.

Brother Rabbit soon came back with a very long and a very strong rope and his big drum. He hid the drum in some bushes. Then taking one end of the rope, he walked up to the elephant.

"Oh, dear Mr. Elephant," he said, "you are big and strong; will you have the kindness to do me a favor?"

The elephant was pleased, and he trumpeted, "Certainly, certainly. What is it?"

"My cow is stuck in the mud on the shore, and I can't pull her out," said Brother Rabbit. "If you will help me, you will do me a great service. You are so strong, I am sure you can get her out."

"Thank you," said the rabbit. "Take this rope in your trunk, and I will tie the other end to my cow. Then I will beat my drum to let you know when to pull. You must pull as hard as you can, for the cow is very heavy."

"Huh!" trumpeted the elephant, "I'll pull her out, or break the rope."

Brother Rabbit tied the rope to the elephant's trunk and ran off, lippety, lippety.

He ran till he came to the shore where the whale was. Making a bow, Brother Rabbit said, "0, mighty and wonderful Whale, will you do me a favor?"

"What is it?" asked the whale.

"My cow is stuck in the mud on the shore," said Brother Rabbit, "and I cannot pull her out. Of course you can do it. If you will be so kind as to help me, I shall be very much obliged."

"Thank you," said Brother Rabbit, "take hold of this rope, and I will tie the other end to my cow. Then I will beat my big drum to let you know when to pull. You must pull as hard as you can, for my cow is very heavy."

"Never fear," said the whale, "I could pull a dozen cows out of the mud."

"I am sure you could," said the rabbit politely. "Only be sure to begin gently. Then pull harder and harder till you get her out."

The rabbit ran away into the bushes where he had hidden the drum and began to beat it. Then the whale began to pull and the elephant began to pull. In a minute the rope tightened till it was stretched as hard as a bar of iron.

"This is a very heavy cow," said the elephant, "but I'll pull her out." Bracing his fore feet in the earth, he gave a tremendous pull.

But the whale had no way to brace himself.

"Dear me," he said. "That cow must surely be stuck tight." Lashing his tail in the water, he gave a marvelous pull.

He pulled harder; the elephant pulled harder. Soon the whale found himself sliding toward the land. He was so provoked with the cow that he went head first, down to the bottom of the sea.

That was a pull! The elephant was jerked off his feet, and came slipping and sliding toward the sea. He was very angry.

"That cow must be very strong to drag me in this way," he said. "I will brace myself."

Kneeling down on the ground, he twisted the rope around his trunk. Then he began to pull his very best, and soon the whale came up out of the water.

Then each saw that the other had hold of the rope.

"How is this?" cried the whale. "I thought I was pulling Brother Rabbit's cow."

"That is what I thought," said the elephant. "Brother Rabbit is making fun of us. He must pay for this. I forbid him to eat a blade of grass on land, because he played a trick on us."

"And I will not allow him to drink a drop of water in the sea," said the whale.

If you use Facebook or Google+ & enjoyed How Rabbit Fooled The Whale And The Elephant, please tell your friends and let us know to find more like it for you!